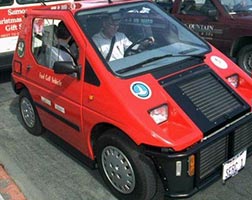 Hydrogen is the most abundant element in the universe. And when you burn it or use it to produce electricity, the only waste product is water.

In the era of global warming, it would seem to be the perfect fuel.

In short, fossil fuels got there first.

Oil, coal and gas were easily accessible and powered the industrial revolution. Around them, entire economies and transport infrastructures were built.

It was only much later that we realised the potentially catastrophic effects hydrocarbon waste products could have on the environment.

“In the Seventies, the oil crisis made people realise that oil-based economies were vulnerable, so people started to get excited about the potential for the hydrogen economy,” says Alex Hart, hydrogen expert at the Carbon Trust.

“But then climate change saw a push towards electricity as the answer to hydrocarbons and hydrogen seemed like a distraction.”

Now hydrogen is staging something of a comeback.
Fuel cell tech

Hydrogen fuel cells have been around for decades, but they have always been heavy and expensive. – BBC