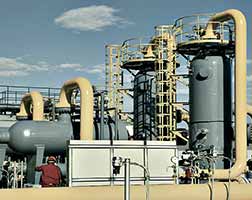 US – California-based Greyrock Energy, a company transforming natural gas into premium transportation fuels, today announced the formation of a partnership with Nerd Gas to deploy gas-to-liquids (GTL) facilities in the US.

Founded by Mick McMurry in 1996, Nerd Gas Company, LLC is a private, Wyoming-based energy investment company whose primary focus is on the efficient and responsible exploration of hydrocarbons in Wyoming and the northern Rocky Mountain region. Nerd Gas Company is one of Wyoming’s leading entrepreneurs in energy projects in a state recognized for the depth and breadth of its extensive mineral resources.

Nerd Gas has invested in the previously announced Sterling Greyrock GTL project to confirm the commercial viability of small scale GTL. Through an affiliate, U.S. GTL, Nerd Gas and Greyrock are partnering to explore the feasibility of gas-to-liquids plants in Wyoming and other locations.   The Nerd Gas and US. The GTL teams have extensive expertise in hydrocarbon technologies, including GTL.

“Greyrock is excited to announce our partnership with the Nerd Gas/U.S. GTL team and look forward to building a portfolio of GTL projects based around Greyrock technology together,” said Robert Schuetzle, CEO, Greyrock.

“The Nerd Gas team has worked for several years on an analysis of gas-to-liquids technologies and their applications in Wyoming and the Rocky Mountain region and believe that the Greyrock approach is best suited for success on these projects,” said Mick McMurry, Founder and President of Nerd Gas. “Our development team is working to ensure that Wyoming GTL facilities can utilize Wyoming natural gas and produce clean transportation fuels for local consumption.”