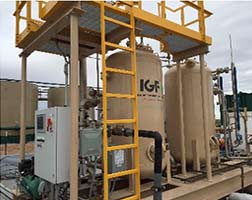 KENTUCKY, US – Purestream Services is now operating its first Permian based IGF Plus 5,000 barrel per day commercial water treatment system for a large producer near Midland, Texas.

Purestream Services has been contracted to treat the wastewater at a centralized water treatment facility that services a series of wells operated by the producer.  Treated water processed by the system will be re-used as part of an integrated water resource conservation effort by the company.

Producers in the Permian Basin in Texas are seeing great benefits as they treat and re-use produced and frac flow-back water nearer to the source of the production. Treatment and re-use is a viable and economic alternative to traditional methods of trucking the wastewater long distances and disposing the wastewater in saltwater injection wells.

“In the current pricing environment, oil and gas producers are looking for cost-effective water treatment processes that reduce the long distances required to haul water for disposal,” stated Purestream CEO Neil Richardson.  “Purestream’s IGF Plus removes suspended solids, oil and grease to below 5 parts per million from the produced and frac water allowing producers to re-use the water in the oilfield with significant overall cost reduction.”

In addition, Purestream’s IGF Plus is an effective tool for fresh water conservation. As the drought continues to impact the availability of fresh water in Texas, producers are also able to conserve fresh water requirements by re-using treated water in the field.

“The IGF Plus System allows producers to integrate new water treatment options into existing operations often at or below disposal and sourcing costs while meeting thresholds for re-use,” Richardson stated.  “We are pleased to be introducing this process to the oil and gas industry in the Permian Basin.”

Purestream Services is contracted to provide an additional four IGF Plus systems for other producers near Midland, Texas in the first quarter of 2015.