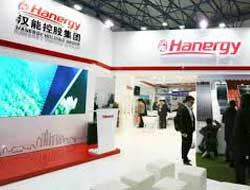 HONG KONG— Hanergy Thin Fillm, a Chinese company which makes solar-panel-making equipment, will slash more than one-third – or 2,000 – of its employees in its bid to restructure.

The company is in a stand-off with Hong Kong regulators and will now begin to focus on developing consumers and industrial solar-energy products.

The company, which sells manufacturing equipment mostly to its privately held Beijing-based parent Hanergy Holding Group Ltd., said it swung to a net loss of 59.3 million Hong Kong dollars ($7.7 million) in the six months ended in June, compared with a net profit HK$1.68 billion in the same period last year.

Hanergy Thin Film said revenue in the same period fell 34% to HK$2.12 billion because of the cancellation of supply agreements with its parent, which makes solar panels.

Trading in Hanergy Thin Film was suspended in May at the company’s request, after the stock lost half of its value in one day. Hong Kong’s Securities and Futures Commission has since extended the suspension indefinitely, as it probes the finances of the solar-equipment manufacturer and its dealings with its parent. Hanergy Thin Film has said the extended suspension is unfair and unreasonable.

Hanergy Thin Film said on Friday in regulatory filings that because of the canceled deals and the SFC investigation, its business partners have had their “confidence damaged” and may “suspend or terminate cooperation.” This could have a negative impact on earnings in the second half of this year, it said.

The SFC investigation into the company includes queries about owner Li Hejun, who briefly became China’s richest man after the company’s shares rose to more than HK$9 in March. The company has said it can’t compel Mr. Li or its parent to provide financial documents requested by the SFC. It added that it plans to appeal the SFC’s decision to suspend its shares.

Hanergy Thin Film said in the regulatory filings that it adopted a new code of conduct regarding securities trades of its directors. It said all directors complied with the code in the first half of the year.

The company’s thin-film technology has the potential for lightness and flexibility. But thin film, which is less efficient than more-common solar panels based on crystalline silicon, hasn’t caught on widely.