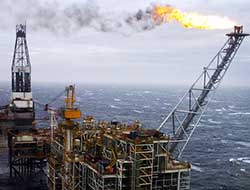 A £3bn gasfield investment – the biggest one of North Sea – has been given the greenlight by the UK Oil and Gas Authority to be developed . Once completed, the Culzean field it is expected to produce gas that will meet 5% of UK’s needs.

The field, discovered in 2008, will be developed by The Danish energy company Maersk. It has gas resources that are the equivalent of 250-300m barrels of oil, and is expected to create more than 400 jobs and support an estimated 6,000 more in the UK.

The announcement comes amid a wider decline in the viability of North Sea production – and fears of British job losses – and takes advantage of tax breaks announced in the budget this year. The chancellor, George Osborne, welcomed it as “a clear signal that the North Sea is open for business”.

The UK has committed to increased gas-fired electricity generation, and the Maersk-operated “high pressure, high temperature” (HPHT) Culzean development should start producing gas in 2019 for at least 13 years, peaking at the equivalent of 60,000-90,000 barrels of oil a day.

Maersk Oil, along with its partners JX Nippon and BP (Britoil), will be investing about £3bn in developing Culzean, with at least half of that committed to investment in the UK. The project has been made more attractive to the investors by new tax allowances to offset the higher capital costs for this type of energy extraction, and to encourage further exploration nearby.

George Osborne in Faslane, Scotland Facebook Twitter Pinterest
George Osborne in Faslane, Scotland, on Monday. The chancellor said the North Sea ‘is open for business’. Photograph: Getty Images
The chancellor warned that such support would not have been made available to the industry by an independent Scotland, which could not have afforded to offer tax breaks. Speaking in Aberdeen, Osborne said: “Today’s announcement sends a clear signal that the North Sea is open for business. Already the UK’s oil and gas industry supports hundreds of thousands of jobs across the country and this £3bn investment comes on the back of massive government support for the sector.

“Despite challenging times, this government has backed the oil and gas industry at every turn, introducing a vital package of support to help it to protect and create jobs. Despite its claims, the Scottish government would have struggled to deliver such support alone – its own numbers showed that due to the current oil price an independent Scotland would have faced a £20bn black hole in its public finances over the first three years.”

Osborne’s upbeat message came as others in the industry warned thousands of British jobs could be at risk after local contractors lost out on bids to build offshore platforms in the North Sea. The Tyneside-based OGN was excluded from the shortlist to help develop an oilfield licensed to US firm Chevron, GN, and criticised policies that saw foreign firms win UK tax breaks without having to use local suppliers. The Oil and Gas Authority has said its role is to get “best value” for the licences.

Andy Samuel, the authority’s chief executive, said: “Maersk Oil and partners’ £3bn investment to develop the Culzean discovery is excellent news for the UK during a period when the decline in global oil prices has created difficult operating conditions for this critical sector of our economy. The Oil and Gas Authority has worked closely with Maersk Oil and HM Treasury on the development plans for the Culzean field, which will support many new contracts in the oil and gas supply chain across the UK.”

Maersk Oil’s chief executive, Jakob Thomasen, said Culzean was an important development for the UK and for the company, and reflected its commitment to the future of North Sea production. He said: “We are pleased the field will support UK economic growth as well as extend understanding of HPHT development. Culzean is the latest in a series of large investments by Maersk Oil in the North Sea.”

However, Maersk said last week it would be seeking regulatory permission to close its Janice oil rig in the North Sea, as it struggled to cope with the impact of plunging oil prices that have rendered much of the region’s high-cost production unprofitable.