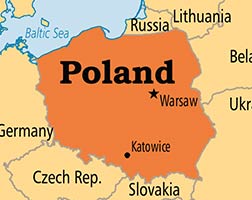 Just one of six turbines at the 160 megawatt (MW) hydro power plant in Wloclawek in central Poland was operating, Jacek Garbol, the head of Energa’s generation unit, said.

Energa also said daily production at its coal-fuelled power plant in Ostroleka, which relies on an external water cooling system, was down by 10-15 % at the end of last week due to maintenance works rather than the heat.

Energa’s total installed capacity is 1.36 gigawatts (GW), 41 % of which comes from renewable sources of energy. Poland’s total power capacity is around 35 GW, most of which is generated in outdated coal-fuelled power plants.

The heat wave and a lack of rain have lowered water levels in rivers used to cool coal-fired power plants from which Poland generates about 90 % of its electricity.