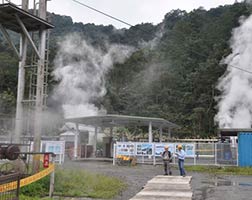 TAIPEI – A geothermal plant which taps into volcanic energy will be built, the Ministry of Economic Affairs (MOEA) said Tuesday.

The plant will harness geothermal energy from the Tatun Volcano Group. It has a potential of generating up to 68.5 million kWh (kilowatt-hours) of electricity per year.

As part of the project’s starting ceremony on Tuesday, test wells were drilled as a demonstration of the endeavor’s efforts. Dr. Lin Chuan-neng (林全能), director general of the MOEA’s Bureau of Energy (BOE), said.

Geothermal heat pumps are an inherently non-polluting, efficient power source that is immune to weather and other seasonal effects, and can be used to provide a constant stream of energy as a base load power plant. Geothermal power would also allow Taiwan to have a fully indigenous source of energy, Lin pointed to the benefits of pursuing geothermal energy.

After two years of geographic surveillance and analysis of geothermal data, experts decided that a location in the mountainous Jinshan District, a part of the Tatun Volcano Group, would provide the greatest amount of thermal power generation. Using conventional drilling measures, the wells dug in the volcanic zone would be able to emit up of 293 degrees Celsius of usable heat.

Based on preliminary assessments by the BOE, the 68.5 million kWh of annually generated electricity would be able to cover an entire year’s worth of energy consumption in New Taipei City’s Jinshan and Wanli districts. The project would also be able to reduce 42,677 metric tons of CO2 emissions every year.

The MOEA estimates the project will be completed by the end of this year.