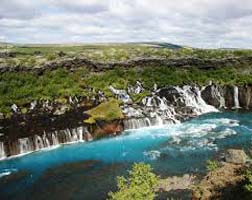 Few Chinese people consider Iceland an economic powerhouse in Europe. Major banks based in the nation’s capital of Reykjavik had defaulted on billions of US dollars in debt during the global financial crisis in 2008.

Due to economic chaos, Iceland’s government had sought radical solutions. Reykjavik had blocked massive imports of fossil fuels (oil, gas and coal) for its power plants. Hence, the small island nation in the Arctic Sea relies 100 % on clean energy for electricity and heating.

Iceland’s President Olafur Ragnar Grimmson and Prime Minister Sigmundur David Gunnlaugson have touted the benefits of the energy transformation as a success story.

“It’s not really about energy, it’s about the economy,” President Grimmson told an audience at Cornell University last November. “The move from fossil fuels over to clean energy is fundamentally good business – it’s fundamentally the road to prosperity.”

All of Iceland’s electric power gets generated by hydropower and geothermal energy. The country has made remarkable progress in these fields. But what exactly is geothermal?

RenewableEnergy.com says geothermal taps into the ground to heat and cool buildings. The heat pumps act as an air delivery system while the heat exchanges was a system of pipes buried in shallow ground near buildings.

Iceland plays a leading role in the geothermal industry that has direct-use applications to heat buildings, grow plants in greenhouses, dry crops, heat water for fish farms along with several other processes such as pasteurizing milk.

Iceland is the first European Union (EU) member state to sign a bilateral Free Trade Agreement (FTA) with China in 2013. Beijing has already completed construction of Rekjavik’s largest embassy complex, which would employ over 500 staff.

The two nations have enjoyed strong diplomatic relations for over 40 years. Beijing and Reykjavik have signed cooperation agreements to deepen exchanges in trade, tourism and energy.

China sees the Arctic Sea as a new path for economic expansion as well. Climate Change is not all bad news for the business world, since further ice melting can open more lanes for supercargo ships to haul deliveries through the Arctic Circle.

Accordingly, Iceland has emerged as the Arctic Gateway for the Chinese business community. The Chinese automaker Geely has also signed a joint venture in the Nordic nation.

The Chinese Greely Group, owner of Swedish automaker Volvo, is building methanol-fueled vehicles that do not require gasoline. The business news Website, IndustryWeek reported that earlier this month, Geely is a major shareholder of Carbon Recycling International (CRI).

The Icelandic company operates the world’s largest methanol fuel plant, while the Chinese company plans to invest US$45.5 million US dollars in the next three years.

“The aim is to collaborate on the deployment of renewable methanol fuel production technology in China,” a joint press release issued by the two companies said. “We will explore the development and deployment of 100 % methanol-fueled vehicles in China, Iceland and other countries.”

The Chinese automaker has embarked on an initiative to manufacture all its vehicles to have 0 % emissions. Production had already started since March 2013. CRI holds capacity of 4,000 tons of renewable methanol that is marketed under the name, Volcanol in Europe, which can be blended with gas and used for biofuel.

Capturing opportunities from the ground up

As Iceland is undergoing an economic rebound, Chinese investors appear poised to cash in. Chinese business people see numerous opportunities with the Nordic country, particularly in the sectors of geothermals and renewables. Hence, Beijing and Reykjavik can work together to dig deep into the Earth’s core for more sustainable energy sources. – CCTV