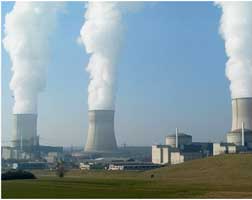 The planned decommissioning of nuclear power plants in the US and Europe by the year 2020 might threaten global plans to cut carbon emissions as nuclear is now the largest low-carbon power source in the US and Europe, the International Energy Agency (IEA) said.

Although nuclear power in the US and Europe is now about three times bigger than solar and wind combined, most of the world’s nuclear power plants were built in the 1970s and 1980s, and many will reach the end of their lifespan by 2022.

The IEA points out that in order to achieve a low-carbon transition consistent with 2-degree Celsius climate goals, the rate of investment in energy efficiency, renewables, and other low-carbon technologies, including nuclear energy needs to be increased markedly by the mid-2020s.

And it is interesting that the IEA has spoken out at this particular time because just 10 days ago, the French environment and energy minister Nicolas Hulot, told reporters at the G7 Environmental Summit that France plans to close some nuclear reactors of state-controlled utility, EDF to reduce nuclear’s share in the country’s power mix.

Nuclear power plants operate, on average about 8,000 hours a year versus 1,500-2,000 hours for a solar plant. And in France, nuclear provides 75% of the country’s power. On the sidelines of the Eurelectric utilities conference in Portugal this week, IEA Chief Economist Laszlo Varro told Reuters, “The aging of the nuclear fleet is a considerable challenge for energy security and decarbonisation objectives.”

Varro pointed out that while renewables have grown rapidly over the past 10 years, 20% of new low-carbon capacity has been lost because of decommissioning of nuclear power plants during the same period. “This is just a taste of thing to come,” Varro said.

Financing a new nuclear plant is an expensive proposition, and in the United States, several projects have run into huge cost overruns, while in Japan, there is a public fear of nuclear power after the Fukushima disaster in 2011.

Decommissioning a nuclear power plant doesn’t come easy, either. The process involves the use of technology, like robotics, and needs to be done under the auspices of nuclear authorities so that the dismantling takes place safely. The whole process can take over several years before it is complete.

“If we do not keep nuclear in the energy mix and do not accelerate wind and solar deployment, the loss of nuclear capacity will knock us back by 15 to 20 years. We do not have that much time to lose,” Varro said.