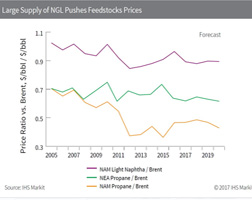 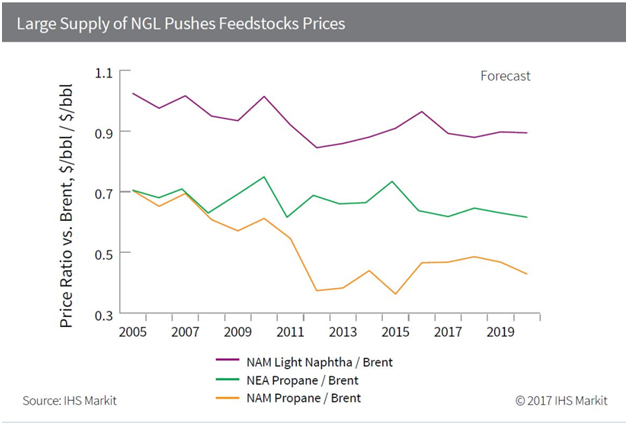 Naphtha, a refined petroleum product derived from crude oil and marketed in heavy and light varieties, is an important feedstock for production of petrochemicals and blendstock for gasoline. Together, light and heavy naphtha constitute about 40% of the global gasoline pool.

Nick Rados, Ph.D., senior director at IHS Markit and lead author of the recent IHS Markit analysis, said naphtha is no longer the dominant petrochemical feedstock due to the surging production of NGLs, particularly ethane and propane.

Prior to the US shale gas and tight oil renaissance, naphtha was the leading feedstock for petrochemical and gasoline production, Rados said, but the jump in production of ethane and propane feedstocks gave North American and Western European petrochemical producers a cheaper alternative to naphtha and a significant profit advantage.

According to the analysis, titled “Light and Heavy Naphtha International Market Analysis: Balancing the Naphtha Surplus”, US and Canadian NGL production has surged at an average annual growth rate of 6.2%, from 104 million metric tons (MMT) in 2011, to 141 MMT in 2016, due to supplies from both wet gas fields and tight oil production, and more growth is expected. 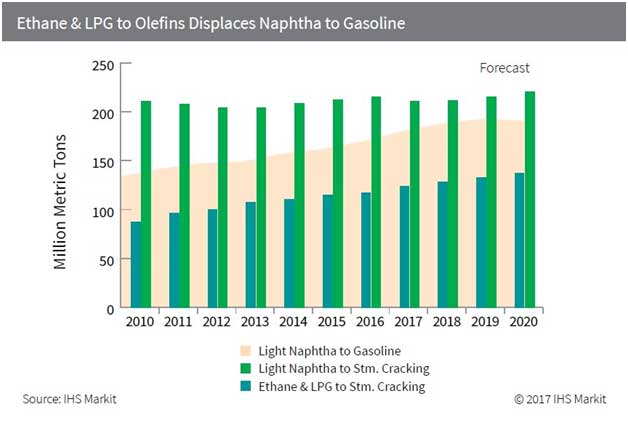 “Olefins producers with the existing flexible, or new, ethane-feedstock plants in the U.S., are enjoying an advantage due to lower feedstock costs, and for European producers, the access to abundant supplies of U.S. ethane feedstocks have given their plants new life,” Rados said.

“We are headed into an increasingly oversupplied market,” Rados said. “Demand growth for petrochemicals and gasoline has slowed due to a global economic slowdown, while many producers have been adding naphtha production capacity—resulting in excess of naphtha and depressed prices.”

Entering 2017, global demand for naphtha (including natural gasoline) is 1,180 MMT according to the IHS Markit report, and the demand growth has been projected to increase to nearly 1,260 MMT, by 2020. That translates to an average annual growth rate of 1.7%, a strong growth rate for a refined product, but not enough to absorb increasing production of both naphtha and NGLs.

While the global market for naphtha will be oversupplied until at least 2020, the IHS Markit analysis said, the propane market is even more oversupplied, with increasing production coming, not only from US shale resources, but also from the Middle East and Russia. Propane prices were sliding before the onslaught of the US shale renaissance, but since then, have plummeted, which in turn put downward pressure on prices for naphtha.

“The current length in the propane shipping fleet, along with the opening of the Panama Canal expansion supports incremental trade, but anticipated increase in crude and naphtha prices will drive even greater volumes of low-cost propane to Asia,” Rados said.

The abundance of petrochemical feedstocks is unlikely to end anytime soon, the IHS Markit report said, with Saudi Arabia, UAE, Kuwait, and Russia investing in more naphtha production capacity. For example, the recent addition of just one large condensate splitter (Novatek in Russia), has added 4 million tons of naphtha supply, or 3.5% of global naphtha trade.

Ethane imports to Western Europe have already started from both the Enterprise Products Partners terminal on the US Gulf Coast and the Sunoco Logistics terminal on the US East Coast. Those shipments will supply the European facilities of INEOS, SABIC, Reliance, ExxonMobil and others.

Rados said companies are essentially making two different bets on feedstocks in Europe. “While some have bet on excess of US ethane (like those just mentioned above), others like Dow and BASF have bet on global oversupply of cheaper propane coming from Russia, the US and Algeria.”

In spite of strong penetration of NGLs, a lighter, paraffinic naphtha is still the predominant feedstock for production of olefins, such as ethylene and propylene, while heavy naphtha remains the most important feedstock for production of high-octane gasoline and aromatics chain products, such as polystyrene, PET (polyethylene terephthalate) plastic and polyester fiber. Gasoline blenders are also at an advantage in the current market, Rados said, because they can buy cheaper blendstock at lower prices. Naphtha is cheaper and octane is relatively cheap at present.

The current market oversupply does not mean that producers will not have investment opportunities in the near to mid-term, Rados said. “After 2020, we foresee a period where some markets could become short of naphtha, particularly heavy naphtha, if investments fall off today. Unlike with light naphtha that can be substituted with NGL feedstocks to make olefins, heavy naphtha is indispensable for production of PET plastic and polyester fiber, the fastest growing demand segment for naphtha.”

The market outlook for naphtha and other petrochemical feedstocks will be key topics of discussion at the upcoming IHS Markit 32nd Annual World Petrochemical Conference (WPC), March 20 to 24, 2017, at the new Marriott Marquis Houston in Texas, USA.