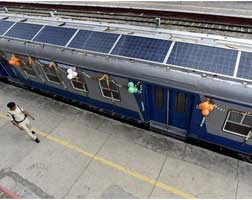 India has launched its first-solar powered Diesel Electrical Multiple Unit (DEMU) trains which the government hopes will save around 21,000 liters of diesel annually. The move comes as the government attempts to transform the country’s vast rail network into a more environmentally transport system.

The new 1,600-horsepower DEMU trains are fitted with 16 solar panels on each carriage as well as battery back-ups.

The first train, which is pulled by a diesel-powered locomotive, has been launched on New Delhi’s suburban commuter railway system, with the routes for the rest of the new trains to be decided soon.

The 7,200 kilowatts of energy created each year by the solar panels will be used to power internal lights, fans and other electrical systems on the train coaches.

Each solar-paneled coach will reportedly offset carbon emissions by nine tons a year, which is expected to save around 21,000 liters of diesel.

Union railway minister Suresh Prabhusaid in an interview that the trains are a “path-breaking leap” towards the goal of making India’s trains more environmentally friendly.

The department of railways is also increasing its use of alternative energy sources as part of its commitment to using cleaner fuels, he added.

The solar panels last for up to 25 years and will be inspected regularly.

Sundeep Gupta, vice chairman and managing director of Jackson Engineers, which worked on the project, noted that their engineering skills were put to a real test during the execution of the rooftop solar project for the Indian railways as fitting the roof of train coaches that run at a speed of 80 kilometers per hour was not an easy task.