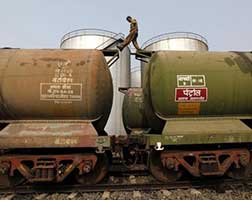 India has bought the first oil for its strategic petroleum reserve (SPR), trade sources said on Monday, marking the start of a round of purchases by the world’s fourth-biggest oil consumer to build up emergency stockpiles.

Oil prices have almost halved in the past year due to excess global production, leaving traders looking for any signs of new demand to help absorb the surplus.

The sources said state-refiner Indian Oil Corp bought a 2 million barrel cargo of Iraqi crude from Chinese trader Unipec, which will load in May for shipping to the first stage of India’s SPR on the country’s east coast.

In addition, state-refiners IOC and Hindustan Petroleum Corp Ltd will buy another three Very Large Crude Carriers between them for the Vizag SPR storage site in Andhra Pradesh.

While the first 8 million barrels for Vizag are relatively small compared with the global market, totalling less than 10 % of daily demand, India’s purchases could ramp up later this year as the country completes construction of the next phase.

Two SPR sites, at Padur and Mangalore on India’s west coast, will have a capacity of 29.3 million barrels and are expected to be ready by October.

India is heavily reliant on fuel imports, producing less than a third of the nearly 3.7 million barrels per day it consumed in 2013, data from the U.S. Energy Information Administration shows.

Its fast-growing economy has become the world’s fourth-largest oil consumer after the United States, China and Japan.

China’s own SPR purchases, which have helped support oil prices during the global supply glut, are expected to slow this year with commercial and strategic storage space almost full.

China’s strategic stocks were estimated in January at more than 30 days’ worth of crude imports. It plans to eventually build reserves of around 600 million barrels, or about 90 days of import cover.

India’s SPR should cover approximately 13 days of imports when it is completed by the end of this year.

The east coast Vizag facility has two compartments of 7.55 million barrels and 2.20 million barrels, with the smaller to be used by HPCL for its 166,000 bpd refinery at the site.

The VLCC cargo Basrah IOC bought from Unipec, the trading arm of China’s state-backed oil producer Sinopec, was purchased at a premium of 50-60 cents to the official selling price of the Iraqi grade, the sources said.

Separate from the SPR purchases, IOC has re-floated a tender seeking a million barrels of heavy grades for April first half loading, traders said. This tender will close on Tuesday with bids remaining valid till Wednesday.

Brent crude oil prices were down by around US$1 a barrel on Monday near US$55 a barrel, having fallen from above US$110 a barrel in June. – Reuters