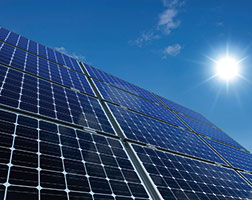 On Wednesday, Prime Minister Narendra Modi and the Indian Cabinet approved increasing the country’s solar target five times to a goal of reaching 100 gigawatts, up from 20 GW, by 2022.

The new solar capacity will be nearly split between residential and large-scale solar projects, with some 40 GW expected to be generated from rooftop installations and the remaining 60 GW coming from larger, grid-connected projects, such as solar farms.

“With this ambitious target, India will become one of the largest green energy producers in the world, surpassing several developed countries,” reads the announcement. “Solar power can contribute to the long term energy security of India, and reduce dependence on fossil fuels that put a strain on foreign reserves and the ecology as well.”

The announcement ups the stakes significantly for the Jawaharlal Nehru National Solar Mission, launched in 2010 by Prime Minister Manmohan Singh, which aims to help the country achieve success with solar energy deployment.

In 2013 India added just over one GW of solar capacity to its grid, which at the time nearly doubled the country’s cumulative solar capacity to 2.18 GWs. In the ensuing year and a half, Indian leadership has become more focused on securing financing to ramp up its solar program as part of a stated goal of bringing power to the 400 million Indians currently getting by without it. The current power deficiencies, combined with the rising costs of fossil fuel-generated power, make solar and other renewables an even more attractive option.

In a sprawling, diverse country of more than 1.2 billion residents, this task is tantamount to a second green revolution, the first being agricultural advances that relieved famine across the subcontinent in the middle of the 20th century.

Indian cities also have some of the worst air pollution in the world, and as the public becomes more engaged with these issues the government will be forced to incorporate demand for cleaner and healthier living conditions. The country has also recently been rocked by a prolonged heat wave, a tragedy that cost thousands of lives. This type of incident will become exacerbated by climate change.

According to the latest announcement, achieving the 100 GW target will require around 600,000 crore, or approximately US$100 billion.

Though it’s been a critical year for international climate negotiations, India has been less focused on carbon reductions and more intent on securing green energy financing. The announcement continues this trend, stating that the “Government of India may also approach bilateral and international donors [and] also the Green Climate Fund for achieving this [solar energy] target.” The US$10 billion Green Climate Fund is a new international mechanism intended to help poor countries develop in a low-carbon capacity.

Though carbon reductions may not have been India’s intention, the announcement also states that the new solar target will result in the reduction of over 170 million metric tons of carbon dioxide.

Currently India has around 4.5 GWs of solar capacity installed, and the Indian consultancy firm Bridge to India recently estimated that the country was on track to install 31 GW by 2019 — leaving it nearly 70 GWs short three years before the new target deadline.

According to Bridge to India, there are a number of challenges and setbacks in the government’s way to achieving these targets, including land acquisition, grid infrastructure, and financing. The group found that it would take around US$40 billion worth of debt for the country to reach the 60 GWs of utility-scale solar it aims to install by 2022. The majority of this is planned to come from international sources such as the World Bank as well as investments by international solar companies.

For instance, U.S.-based SunEdison is planning to install more than 10 GWs of solar in India in the next seven years, including a US$4 billion solar equipment factory. And this week, leading Indian power generation company Adani Power agreed to set up the country’s largest solar park, a 10 GW facility in Rajasthan.

Indian leaders and the solar industry can take reassurances from the bumper year that 2015 is expected to be for the domestic industry. Bridge to India estimates that India will install more solar this year than Germany, some 2.7 GWs, and in doing so become one of the top five solar markets globally, after China, Japan, the U.S., and the U.K.

Bringing India to the forefront of the solar power revolution will require international assistance, but it will also require local cooperation. In Wednesday’s announcement, the Prime Minister’s Office asks local ministries to contribute by identifying land and buildings that could be used for solar; helping develop green energy transmission corridors; setting up sites for domestic production of PV materials; and making rooftop solar mandatory on certain building projects, among other things. – Think Progress