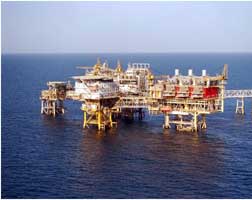 More than half of the investment will go to the development of the R-12 (Ratna) field, expected to start producing oil by 2018-19. ONGC expects the field’s peak production rate of 14,583 barrels of oil per day (bopd) to be reached in 2019-20. As part of the development plan, 31 wells will be drilled and completed, the company said.

Last September, ONGC said it would invest US$5.1 billion (Rp340.12 billion) over the next four years in the development of a deepwater oil and gas block off India’s east coast.

India is seeking to boost domestic production as it is trying to reduce its dependence on oil imports as oil demand continues to grow.

This year, for the third year in a row, India’s oil demand growth will outpace China’s, S&P Global Platts said in its Oil and Gas Outlook 2017 in early January. Platts Analytics expects a 7% rise to 4.13 million barrels per day (mbpd) in Indian oil demand, compared with a 3% rise in Chinese oil demand to 11.50 mbpd this year.