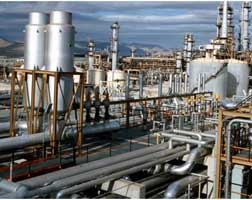 Iran will launch 30 new petrochemical projects within the 6th National Development Plan by the end of March 2018, which marks the end of the next Iranian calendar.

Marzieh Shah-Daei, the country’s deputy oil minister and head of the National Petroleum Company (NPC), made the announcement during the opening ceremony of four petrochemical projects adding that the “petrochemical industry is the pioneer of implementing Resistance Economy policies since it best prevents raw retail of hydrocarbon resources; given the development of South Pars phases, the produced feedstock will be used to expand the industry.”

She said 52 petrochemical units with a nominal capacity of 60 million tons existed in the country whose output hit an aggregate total of 51 million tons in the previous year. At the same time, domestic sales of petchem products reached 28 million tons worth 15 billion dollars while goods worth nine million dollars were exported.

Deputy Iranian oil minister recalled that for Morvarid, Takhte Jamshid, Entekhab and Kavian petrochemical complexes, respectively 300, 70, 200 and 313 million dollars of foreign investment were made giving a total of 883 million dollars which have increased the country’s output by two million tons.

“Since 2013, as many as 13 projects with four million dollars of investment have become operational adding 5.2 million tons to the production capacity for petrochemical products,” underscored Shah-Daei adding “it has been anticipated that 7 projects in 2017 and 10 projects in 2018 will add 20 million tons to the country’s output capacity though they require injection of nine million dollars.”

The official said NPC seeks to implement petrochemical projects not only in Asaluyeh and Mahshahr but also in other regions like Kish Island, Qeshm Island, Lavan, Jask and Chabahar Port not to mention Parsian Energy Intensive Industrial Special Economic Zone in the vicinity of Asaluyeh.