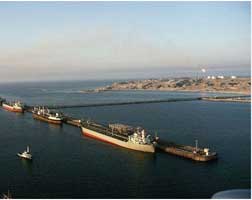 Iran’s Kharg oil terminal has boosted its crude oil loading capacity to 8 million barrels per day (bdp),triple the current Iranian crude and condensate exports, according to the managing director of the Iranian Oil Terminals Company (IOTC).

According to official data quoted by a local economic daily, Iran’s exports are currently more than 2 million bpd of crude oil, plus another 600,000 to 700,000 bpd of condensates.

Vessel traffic at the Kharg has been rising since some of the Western sanctions against Iran were lifted in January 2016, according to the manager.

Iran, which was allowed to slightly raise output and keep it at 3.8 million bpd under the OPEC production deal, has repeatedly said that it is looking beyond what it says is a ‘short-term’ agreement, and aims to raise its crude oil production and production capacity.

Oil Minister Bijan Zanganeh has recently said that by 2021, Iran would add 700,000 bpd to its overall capacity, with a targeted total capacity of 4.7 million bpd. Zanganeh was hopeful that condensate production would increase from 600,000 bpd to 1 million bpd by March.