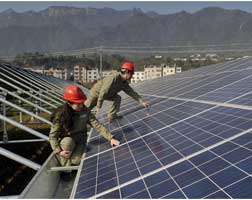 Employment in the global renewable energy industry grew 1.1% in 2016 from the previous year, giving jobs to more than 9.8 million people, with 62% of these jobs located in Asian countries, a new report from the International Renewable Energy Agency (IRENA).

Although growth has slowed in the past two years, the solar photovoltaic category and wind business more than doubled their respective employee numbers since 2012, the first year assessed, the agency said in the report.

“The nature of jobs is changing a little bit, with more emphasis on the installation, operational and maintenance side,” said Adnan Amin, the agency’s director general. “That doesn’t grow as fast as the growth in manufacturing, which was very quick because the technology cost was coming down and you had this huge explosion in equipment.”

Jobs will continue to grow in developing countries, especially in Asia, he said.

The report found that installation and manufacturing jobs continue to shift to Asia, particularly Malaysia and Thailand, which has become a global center for solar PV fabrication.

Solar PV has become the largest segment by total jobs in 2016, employing 3.09 million people. It is followed by liquid biofuels at 1.7 million, while the wind industry had 1.2 million employees, a 7% increase from 2015.

In the US, jobs in the solar industry increased 17 times faster than the overall economy, growing 24.5% from the previous year to over 260,000.

“In some African countries, with the right resources and infrastructure, we are seeing jobs emerge in manufacturing and installation for utility-scale projects. For much of the continent however, distributed renewables, like off-grid solar, are bringing energy access and economic development. These off-grid mini-grid solutions are giving communities the chance to leap-frog traditional electricity infrastructure development and create new jobs in the process,” said Dr. Rabia Ferroukhi, head of IRENA’s Policy Unit and deputy director of Knowledge, Policy and Finance.

“Renewables are directly supporting broader socio-economic objectives, with employment creation increasingly recognized as a central component of the global energy transition. As the scales continue to tip in favor of renewables, we expect that the number of people working the renewables sector could reach 24 million by 2030, more than offsetting fossil fuel job losses and becoming a major economic driver around the world,” Amin said.