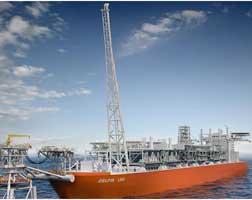 Delfin LNG, the proponent of the project, will be able to export 1.8 billion cubic feet of gas per day (Bcf/d) from the floating deep-water facility, called Delfin LNG Deepwater Port (Port Delfin). The facility, jointly owned by the India and Singapore-based Fairwood Group and the US-based Peninsula group, is expected to be operational in 2020.

Federal law requires approval of natural gas exports to countries that have a free trade agreement (FTA) with the US. Due to its offshore location, the environmental review of Delfin was led by the Maritime Administration (MARAD) and the US Coast Guard.

According to the company’s website, the Port Delfin project has four main parts:

Delfin initiated the purchase of the UTOS Pipeline (now Delfin Offshore Pipeline) from Enbridge Inc. in 2012 and closed the transaction in 2014. The pipeline was originally built to transport gas from offshore wells in the Gulf of Mexico into the US natural gas market.

However, Delfin LNG will build an onshore compression facility to reverse the flow of the pipeline to deliver processed gas from onshore sources to the Delfin LNG Deepwater Port. The LNG will be transferred from storage tanks on the floating LNG vessels to an LNG carrier where it will be delivered to customers around the world.

The facility would include four floating and moored liquefaction vessels, each capable of processing 210,000 cubic meters of natural gas. The LNG would then be loaded onto other vessels for transport. Plans are to accommodate 31 tankers annually at each vessel, or about 124 shipments per year, said Houston-based Delfin.

The four floating LNG vessels would move to safe harbors in the event of hurricanes or major storms and then return and hook up again to the facility.

Delfin says it is convinced that floating liquefaction will be the future of LNG production. Floating liquefaction is environmentally friendly, cost competitive, economical with limited scale, moveable in the event of a hurricane and has a shorter and more efficient schedule relative to an onshore plant.

Further, in the event that global energy markets drastically change in the coming decades, a floating liquefaction plant provides greater flexibility for decommissioning and re-deployment.

The news comes as President Donald Trump announced that the US will withdraw from the Paris accord involving 200 countries working together to fight against climate change. US Secretary of Energy Rick Perry said: “Today the President announced that the United States will no longer be bound by an agreement unilaterally entered into by the Obama Administration. This was neither submitted to nor ratified by the US Senate, and is not in the best long term economic interest of the United States. President Trump’s decision will prove to be the right course of action and one I fully support.

“Instead of preaching about clean energy, this administration will act on it. Our work and deeds are more important than empty words. I know you can drive economic growth and protect the environment at the same time, because that is exactly what I did as Governor of Texas.”

Perry says that using gas has enabled the US to achieve the largest drop in carbon emissions of all countries in 2016. He is eager to bring the benefits of gas to international trading partners and will take this message to Japan, and then to China for the Clean Energy and Mission Innovation ministerials, where he plans to strengthen the US-China LNG export partnership.

With the rapid increase in domestic natural gas production, the US is transitioning to become a net exporter of natural gas. The DOE has now authorized a total of 21 Bcf/d of natural gas exports to non-FTA countries from planned facilities in Texas, Louisiana, Florida, Georgia, Maryland, and now, with Delfin, from the Gulf of Mexico.

The Delfin project would further position the US to become the predominant LNG supplier to the rest of the world, says Perry.