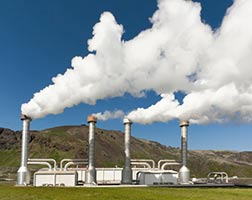 Indonesia has the largest geothermal reserves in the world. Yet, the government’s failure to manage its natural resources effectively and reform its regulatory environment remains an obstacle to fully tap into the country’s renewable energy wealth.

Indonesia’s concurrent economic boom and persistence of poverty have not only exacerbated social inequality but also increased demand on natural resources and the environment. Between 2002 and 2012, Indonesia’s energy demand surged 44 %. Over the past decade, coal consumption nearly tripled and overtook natural gas, becoming the most consumed fuel after petroleum. Indonesia is the third largest emitter of greenhouse gases worldwide.

With annual growth rates between 5 and 6 % since 2010, the country’s development is unrelenting. Its population is moving towards city centers and such urbanization is contributing to an 8 to 9 % increase in energy demand annually. It is clear that the government cannot meet the rising demand with present power generation capacity.

As a result, a quarter of Indonesians live without electricity. The government has set a national goal to ensure that 90 % of households have access to electricity by 2020. To do so, Indonesia projects it will need to develop more than 55 GW of new power plant capacity by 2020. At least 65 % of the new power plants will be coal-fired, while around 12 MW will be generated from renewable sources.

Harnessing the power of the Pacific Rim

Along the Pacific Rim, Indonesia’s islands are a hotbed of geothermal energy. Nationally, it has more than 40 % of the world’s geothermal reserves, or approximately 30 GW, making it the largest reserve in the world. Yet, less than 5 % of these resources have been developed to date.

Geothermal resources of this magnitude could power much of Indonesia’s electricity. The government plans to increase the share of geothermal generating capacity so it accounts for 5 % of the country’s total requirements by 2025.

Not only will geothermal power help produce cleaner energy, reducing Indonesia’s heavy greenhouse gas footprint, but it will also lessen impacts on the country’s water resources. While geothermal energy still requires water for traditional and enhanced geothermal systems throughout the lifetime of the power plant, its impacts are less profound than coal production.

For example, Borneo produces more than 87 % of Indonesia’s coal and has been adversely impacted by coal’s demand for water. Coal requires water for extraction, washing, and transportation, and also pollutes surrounding waterways with heavy metals and sulphates. The acidity of local watersheds has also increased substantially, harming aquatic life and the health of nearby populations.

Green growth and harnessing renewable energy will thus help Indonesia assuage the burden on its water resources while meeting energy demand. Currently, Indonesia faces water scarcity due to degraded basins from sedimentation and development. Urbanization has resulted in high levels of water pollution and farmland conversion. Such water stress exacerbates tensions between users for water and has resulted in overexploitation of groundwater.

The Indonesian government has recognizes that environmental issues are a key development challenge and that failure to address sustainability risks will reduce economic growth and threaten development outcomes and poverty reduction. It has pledged to increase renewable energy options in its generating capacity and to reduce greenhouse gas emissions by 26 % by 2020.

On its path to fulfill its promises the Indonesian government faces a number of obstacles. Among others, the country remains challenged by its lack of adequate infrastructure and a complex regulatory environment, which both domestic and foreign investors view as “prohibitively cumbersome” as the Bertelsmann Stiftung’s Transformation Index (BTI) points out in its recent Indonesia report.

When it comes to managing its natural resources, Indonesia still has much room for improvement. “The country’s abundant natural resources are often not professionally managed. Illegal logging, mining and fishing cost the state billions of dollars each year, and it has fallen behind in developing new gas, oil and mining concessions that could be of substantial budgetary benefit,” write the BTI experts.

Yet, the international community does view Indonesia as a credible and reliable partner and as investment destination the country remains in high demand. With its commitment to climate targets and sustainability initiatives, Indonesia drives regional cooperation and integration in Southeast Asia, especially as it leads the Association of Southeast Asian Nations (ASEAN).