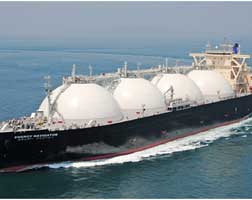 State-backed Philippine National Oil Company (PNOC) will select the winning bid for the project as early as this year. Should the Japanese win, total investment would come to about 200 billion Yen (US$1.79 billion). With gas fields in the Philippines seen drying up in the mid-2020s, construction of LNG import bases is considered imperative.

The project is part of a broader effort among Japanese companies to win all-in-one energy projects overseas. Tokyo Gas and others have experience in buying the resource as well as in building and operating import bases and power-generating facilities in Japan.

Various LNG procurement channels the Japanese have established, including those in the US and Australia, will allow for a stable supply of the fuel to Southeast Asia. Japan’s energy-efficient power plant technologies are also highly regarded.

The government will support the exports via the Japan Bank for International Cooperation. It seeks to tout Japan’s LNG infrastructure expertise to Association of Southeast Asian Nations countries and other markets where strong demand is projected. Top government officials will promote the effort at summits and elsewhere.

Major gas companies are sharpening focus on Southeast Asia as they work to overhaul earnings structures amid intensifying competition in Japan due to this April’s deregulation of gas retailing. Tokyo Gas and Osaka Gas have already set up business bases in the Philippines.

LNG is pricier than coal but emits only half as much carbon dioxide when burned for power generation. As economic development drives energy demand in Southeast Asia, “LNG will be an option as an energy fuel where carbon reduction awareness is growing,” in the words of an official at Japan’s Ministry of Economy, Trade and Industry.

LNG demand in Southeast Asia will grow nearly 2% a year through 2040, the International Energy Agency projects. At least 10 LNG bases are being built or planned in Vietnam, Indonesia and elsewhere, according to the Japan Oil, Gas and Metals National Corp.

The government sees infrastructure exports as a pillar of Japan’s growth strategy. And focus is shifting from such traditional structures as bridges and roads to high-speed rail, LNG energy and other areas where Japan is technologically strong.

LNG is drawing attention as a relatively clean fossil fuel amid a murky international business climate for nuclear energy. With the Fukushima disaster of March 2011 still looming large, Vietnam scrapped plans to construct nuclear plants that would have used Japanese technology, while South Korea’s new president has called for weaning the country off the atom.