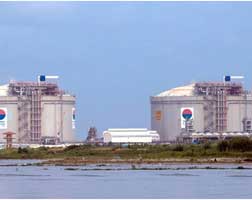 Petronet, India’s largest liquefied natural gas (LNG) importer, has signed a deal to set up a US$950 million LNG import project in Bangladesh.

The Indian oil and gas company has signed a memorandum of understanding (MoU) with Petrobangla, the government-owned national oil company of Bangladesh, to set up a 7.5 million tons-a-year project to receive and regasify LNG on Kutubdia Island in Cox’s Bazar and lay a 26-km pipeline to connect it to the consumption markets.

Petronet LNG CEO and Managing Director Prabhat Singh said they intend to start marine survey this January and are targeting 2020 for the project completion.The project envisions future expansion and can be used to supply LNG through small barges and LNG trucks to users which are not connected by gas grid.

Singh signed the preliminary agreement with Petrobangla secretary Syed Ashfaquzzaman on December 30. A formal pact will be signed once a joint venture is agreed between Petronet and Petrobangla.

“We are keen that Petrobangla becomes part of the joint venture (building the LNG) project and are willing to offer them up to 26% stake. But they are not keen to invest due to fund constraints. So we would like them to keep a nominal interest of say 5% or so,” he said.

Petronet, he said, is not looking at partnership with Petrobangla for funds but only for project securitization. “We want an assurance that they will buy the gas we import,” he said.

Singh said his company is also keen to rope in state gas utility GAIL India Ltd. in the project at some point to help implement the pipeline that is to be laid to connect the import facility with consuming markets. And others like Indian Oil Corp. (IOC) too can join if city gas projects are to be developed, he said.

“GAIL may be wanting to sell LNG into Bangladesh and then there is this pipeline. So, it will be a great fit if they join the project,” he said.

Bangladesh has a lot of unmet demand. Gas demand is projected to more than double to 45 million tons from current 20 million tons in next 20 years.

“The LNG projects planned will not be able to meet all of this demand,” he said. Petronet’s import terminal is expected to be completed within four years. Excelerate Energy is looking at setting up a floating terminal at Moheshkhali.