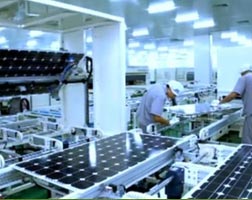 Major tier-1 PV module manufacturer JinkoSolar is starting up production of both solar cells and modules at a new facility in South-East Asia by May 2015.

The integrated production facility was said to include 500MW of solar cell production and 450MW of module production capacity.

The China-headquartered solar industry specialist has some capacity increases in cue. Solar wafer capacity is not expected to be increased in 2015 from its 2014 level of 2.5GW, which was increased by only 200MW between the third and fourth quarters of last year.

However, solar cell production is expected to increase by 500MW in 2015, indicating the only capacity expansion of cells is related to the new plant in Southeast Asia.

According to the management, the capital expenditure of between US$50 million to US$70 million would be specifically allocated to solar cell efficiency upgrades at its existing production plants in China this year.

JinkoSolar also said that overall PV module capacity would in increase from 3.2GW in 2014 to 4GW in 2015, indicating module production in China would increase by around 350MW when considering the 450MW planned in Southeast Asia.

Overall manufacturing expansion capital expenditures were said to be in the range of US$100 million to US$120 million in 2015.

Management also noted in the earnings call that it expected to increase its module shipments and gain market share in the North American market in 2015, guiding the region would account for between 18 to 24% of full-year sales.

The company expects the North American market to pick-up strongly in the second quarter of the year and beyond, while UK and Japan will be strong for shipments in the first quarter of 2015.

Overall capacity expansions by JinkoSolar would seem to be reflective of estimated market demand growth of around 20% in 2015 and company shipment guidance of 3.3GW to 3.8GW.