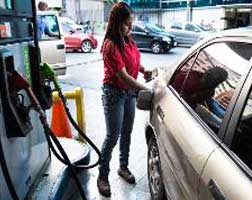 Latin America spends billions of dollars subsidizing fossil fuels each year, but also has some of the world’s largest renewable power programs, highlighting the energy-hungry region’s divisions as it charts its future.

Exhibit A is Venezuela, estimated to have the biggest oil reserves on Earth, where drivers can fill their gas tanks for about US$1.

Exhibit B is Uruguay, which has one of the most advanced wind-energy programs anywhere and was generating 96 % of its electricity with renewables at the end of last year.

With electricity demand projected to double in the next 15 years, the region is split between countries devouring their rich oil, gas and coal deposits and those banking on green energy.

“It’s true it’s a region with a lot of oil and natural gas, but a lot of countries don’t have any,” said Uruguay’s former national energy director Ramon Mendez, who stepped down from the post in February.

That has pushed the small country of 3.3 million people to go green, plopping windmills down among the grazing cows in its vast stretches of unbroken fields to take advantage of the gales that often sweep the plains.

Other countries are making similar bets.

Chile has inaugurated several solar energy projects in recent years and is at work on a massive solar park. Mexico and Brazil have also invested heavily in wind power.

“From 2002 to 2012, electricity generated by wind increased an average of 26 % worldwide. In South America, it increased 51 %, and in Central America 42 %,” said Tabare Arroyo Curras, a WWF energy specialist based in Mexico.

But there is room for improvement, Arroyo Curras said.

“In solar energy, we haven’t made much effort…. We generate less than 0.5 % of our electricity” from solar, he said.

The future energy mix is a high-stakes issue for a region that made massive gains against poverty during its economic boom in the 2000s, but remains the most unequal in the world and desperately needs to reboot growth.

“This puts pressure on the energy system, making energy a challenge for the region,”said Gerard Alleng, climate change specialist at the Inter-American Development Bank (IDB) in Washington.

“But it also provides an opportunity in terms of a long-term perspective when it comes to renewable energy.”

The IDB predicts the region’s bright sun and strong winds could cover more than 20 % of Latin America’s electricity demand by 2050.

But obstacles remain, including what the WWF calls “perverse subsidies for fossil fuels.”

“The countries where it’s very complicated for renewables to make inroads are Bolivia, Peru and Ecuador, which have subsidies for fossil fuels,” said Arroyo Curras.

He said those three countries, together with Argentina, spent around US$40 billion subsidizing fossil fuels in 2013.

That “is basically twice what was invested in renewable energy across the entire continent that year,” he said.

And oil and gas producers are resistant to change.

A source close to one of the governments said there were “tensions” across the region between countries backing renewables and “a group led by Venezuela, Bolivia, Argentina and Ecuador.”

“We’re in the process of drafting an energy treaty for UNASUR (the South American regional bloc), but we can’t get past the table of contents because we have completely different views,” said the source.

Even star pupil Uruguay announced in January that it had found potential crude deposits off its coast.

Even if the country manages to go fully renewable for its electricity grid, it will still need fuel for transportation, he said.