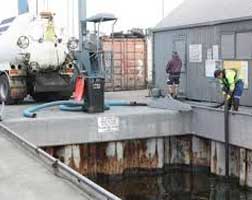 Heavy fuel oil spilled from a ship bunkering at the Port of Tauranga has washed up along the shores of the city’s inner waterways – leaving a “boiling black mess”.

At least three birds were found oiled and taken to a Tauranga wildlife sanctuary following the spill at the port on Monday.

Mobil has confirmed the leak that led to oil being spilled into Tauranga Habour came from one of its pipelines during a ship’s refuelling at the Mount Maunganui wharf.

The petroleum giant has also said it will pay for any direct costs incurred in the spill and response effort in the harbour.

“We apologise for the incident and any concern or inconvenience it has caused for the community,” said Mobil NZ lead country manager Andrew McNaught.

“We would like to assure them we are working as quickly as possible to safely manage the situation, to clean up the leaked fuel oil and minimise the impact on the environment.”

“Mobil appreciates the efforts of the Bay of Plenty Regional Council in responding promptly and effectively to the incident. We will reimburse the council for any direct costs incurred in the spill response and clean-up.”

McNaught said in a statement that Mobil had been made aware a number of boats had also been affected by oil and the company had set up a process to consider claims for direct damage resulting from leaked oil.

“Mobil is liaising with the local marina operator about boat cleaning procedures. We recommend the clean up is handled by an expert.”

The company’s public affairs manager for NZ and Australia, Samantha Potts, said the leak had occurred in one of its pipelines that runs through to the refuelling berth, but was not a main fuel line. She could not confirm how long oil had been leaking.

“We don’t know how long the leak went for – the pipe is over the water and as soon as they noticed it, action was taken.”

“We don’t have an estimate on the size of the leak at the moment, it is hard to determine from the sheen on the water, it was choppy conditions, it is even harder now it has washed ashore.

“The good news is there is no longer any oil in the harbour, there is some unfortunately on the beaches.”

An oil line on the berthed ship Olomana had leaked during the bunkering process (the transfer of fuel from a tank to a ship), sending oil onto nearby berths and into the harbour, SunLive.co.nz reported.

A slick was spotted by Tauranga Bridge Marina staff on Monday, who contacted Bay of Plenty Regional Council’s pollution team and the Port of Tauranga.

Once the spill was spotted, bunkering was stopped, absorbent booms were deployed and responders had attempted to get under the wharf to fix the leak, Bay of Plenty Regional Council onscene commander Adrian Heays said.

Chrissy Jefferson, from Oropi Native Bird Care Trust, said one shag had been brought to the centre “drenched in oil” and two other birds had reportedly been found oiled.

Monday’s rough weather meant birds were sheltering and therefore less affected, according to the Bay Of Plenty Regional Council.

The shag found at Maungatapu had been wiped clean and was now feeding on fish, but it would be another few weeks before it could be waterproofed and released.

“He is doing well, he has been fed via a tube and is eating, once he got over the initial shock. He looked like someone had dunked him in a pot of oil.”

Wiping the bird clean had stopped it from ingesting any oil during preening, said Jefferson.

Since hearing of the spill, Jefferson had readied volunteers and prepared rubber sheeting to stop oil spreading through the sanctuary.

“We have to find somewhere to put the contaminated water for disposal.

She said two more birds, understood to be shags, were being brought to the Oropi centre on Tuesday for washing and care.

“Any incidents like this can be avoided, it causes a lot of work and distress, it is their home that has been invaded by this black, sticky mess.”

Julia Graham, of Mauao Wildlife Trust, said penguin monitoring teams had been assembled and would be checking for any oiled penguins on Tuesday night.

“We are hoping we don’t find anything but we wouldn’t be surprised if we do.”

Graham said penguins typically come into the harbour so there was a possibility of penguins being found with spots of oil.

“If they are in urgent need of veterinary care most will be taken to the Wildlife Centre in Oropi, where they will be cleaned and waterproofed.”

About 30 to 40 people would be split into teams and out checking penguin habitats around Mauao, Rabbit Island a Moturiki Island.

Oil has been spotted on Maungatapu, covering about 300 metres of the beach, about 1metre wide north-east of Turret Rd.

“We have reports of soiled boats in the marina, and one oiled shag has been reported, which is being cared for by DOC. A land team is assessing wildlife in the area,” Heays said.

Most of the blackened oil has been trapped in seagrass, which will be removed as soon as possible, said council.

The affected beach was difficult to access by vehicle and the oil pollution team would be using its oil spill trailers to clean up the oil.

Heays said the amount of oil spilled is still unknown, but all shorelines were being checked by boats and helicopter, including Pilot Bay and Matakana Island. Spots of oil have been seen up and down the harbour and along the shoreline.

A helicopter survey Tuesday morning has shown no more oil in the water.

“It is important that people don’t try to clean up the oil themselves. This is heavy fuel oil, and is persistent in the environment. We will be cleaning up any oiled areas using the proper equipment, so please do not attempt to do this yourselves or touch the oil.

“Today we are gathering as much information as possible on where the oil has gone and ensuring we can clean up as much as possible. There are booms under the wharf to contain what is there,” he said.

SunLive reported the leak was believed to have come from a break in the fuel line under the Mount Maunganui wharf and thought to have been pouring into the harbour for an hour on Monday morning. The 5000-tonne Olomana left the Port of Tauranga at 8am Tuesday bound for Tonga.

Residents around Maungatapu and Turret Rd areas reported smelling oil from their homes on Monday and on Tuesday could see thick, black patches of heavy fuel oil mangled along the shore.

Maungatapu resident Dennis Duncan had gone to check the security of his jetty at the end of Moiri Pl when he spotted the oil on Monday lunchtime, reported SunLive.

“It was raining pretty hard and the wind was coming in so I went down to make sure the jetty wasn’t getting moved around.

“When I got near to it I could smell oil, and when I got closer you could see it on the water. It was washing over the jetty. I rang the council straight away and they said they’d already had a call about it. I asked what they were doing about it but the woman on the phone said ‘I only take the calls’.

“She said it came from a spill in the harbour and looking at it this morning, you can see it all up in the grass and places like that. I’m concerned because the grandkids play in the water when the weather is good and it’s usually pretty clean.”

Duncan said council had an oil spill responder working in the area early Tuesday, but there had been no direct contact from council.

“It’s really thick oil and it’s disgusting. We’re a long way from the port, but you can see it trapped all around here.

“We should have had a call from the council to let us know what is happening but we haven’t heard anything.”

Another resident, Martin Neil, discovered the spill when his dog came bounding into the home with oil on him.

“I checked the cars to see if they were leaking then came out the front to see a boiling black mess. This was about 5pm yesterday.

“They (council) said they were going to get a bobcat or a digger to pick it all up, but they’re a bit late.”

The spill occurred on an incoming tide and four oil steams had been spotted heading towards Matapihi rail bridge. Conditions had been bad and cleaning up the spill was proving difficult, he said.

Staff had worked with the most effective booms and Maritime New Zealand had been informed, Heays said.

He knew people would want to help with the cleanup, but it was important that this was done by experts, he said.

Maritime New Zealand has since sent an observer.

The Bay of Plenty Regional Council said in a release that teams of trained responders and two boats were deployed on Tuesday to the main oiled sites.

Part of the clean-up focused on recovering oil from around the marina, using a sucker truck.

The waste was being stored in sealed skips before being assessed at Te Maunga and disposed of at the specialist Hampton Downs facility in the Waikato. – Stuff.co.nz