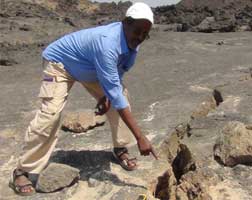 Abdourahman Omar Haga moves his hand over a fissure in a lava lake on the edge of Djibouti’s Ghoubbet el Kharab sea, trying to detect hot vapors invisible to the naked eye in the searing midday sun.

“Can you feel it?” the 59-year-old geologist asks before offering a word of caution: placing one’s hand near the deep crack in the black rock feels like being too close to a steaming kettle. “It’s very hot!” says Haga, who has spent the past three decades looking for ways to tap Djibouti’s geothermal potential.

The site, known as Asal-Fiale, is one of more than a dozen areas the government says may produce at least 1,000 megawatts of electricity. Generating power from steam forms part of the state’s plan to become completely reliant on renewable energy by the end of the decade and cut electricity costs that the African Development Bank says are among the highest in the world.

Djibouti needs cheaper power to fund the expansion of its harbors which cater for landlocked neighboring Ethiopia, Africa’s fastest growing economy that relies on the Horn of Africa nation’s ports for most of its exports and imports. One of the world’s 20 poorest countries, it’s also trying to attract investment to provide jobs to the 48 % of the population the World Bank estimates are unemployed.

“If you have cheaper energy it will attract investment,” Haga, the head of natural resources in the energy ministry, said in an interview this month. “Energy is the key to creating jobs. It could transform the country.”

Sandwiched between Somalia and Eritrea, Djibouti’s economy depends on services related to its location at the entrance to the Red Sea, one of the world’s busiest shipping lanes. The former French colony is about the size of New Jersey. It’s home to the only permanent U.S. military base in Africa at Camp Lemonnier, along with French and Japanese military deployments.

Under a program known as Vision 2035, the US$1.67 billion economy is targeting middle-income status — gross national income per capita of US$1,045 to US$12,746 — within two decades. The economy is forecast by the International Monetary Fund to expand 6.5 % this year and 7 % in 2016. The growth plan calls for the expansion of its ports and shipping services to become the largest logistics hub on the continent.

To do that, the country needs to reduce its energy tariffs, according to the World Bank. Power bills account for about 25 % of business expenses in Djibouti and hinder industrial development, while most companies in the country cite electricity as the most significant business constraint, the bank said in a March 2014 report.

Electricity rates in Djibouti are about US$0.28 per kilowatt-hour, according to the website of the Djibouti Free Zone. That compares with an African average of US$0.14 and US$0.07 in East Asia and US$0.04 in South Asia, African Development Bank data shows.

Djibouti currently has the capacity to produce 173 megawatts of power, according to the Energy Ministry. Costs are high because the grid is reliant on diesel — more than three quarters of electricity needed by the country is generated by thermal power plants. The rest is imported from Ethiopia.

The Japan International Cooperation Agency completed a survey of the 13 potential geothermal sites last year. Within the next year, the ministry expects four exploratory wells to be drilled near the caldera at Asal-Fiale that exploded about 50,000 years ago and now forms the lava lake. Other sites that have shown potential include Hanle-Garabbayis, North Goubet and Gaggade, according to Haga.

The boiling water that bubbles beneath Djibouti’s semi-desert landscape was first detected in 1970 by French geophysicists, seven years before the country gained independence. Since then, successive efforts have been made to start producing geothermal power.

Wells drilled near Lake Assal — at 155 meters (509 feet) below sea level it’s Africa’s deepest point — between 1985 and 1988 weren’t developed because the technology didn’t exist to cater for the high salinity of the water, according to Haga. Then civil war erupted in the country in 1991 and continued for three years.

In 2007, Reykjavik Geothermal Ltd. of Iceland signed an agreement with the government to develop Djibouti’s geothermal potential, with a view to starting power production by 2012. Those plans were scuttled by the Icelandic financial crisis, a paper delivered by the Djibouti Office for Geothermal Energy Development, or ODDEG, showed at a conference in Arusha, Tanzania in October.

Energy Minister Ali Yacoub Mahamoud says there’s renewed commitment within government to develop the energy source, 45 years after it was first discovered. The country raised US$31 million from the World Bank, the African Development Bank and other multilateral lenders to carry out exploratory drilling, according to the ODDEG.

“There is a confluence of factors that will help us develop geothermal energy this time,” Mahamoud said in an interview at his office in Djibouti City, the capital. “We have political stability, technology has been modernized to deal with the high salinity of the water. We also have lots of investors from the U.S., Japan, Australia and Italy interested in helping us.”

The country is already working on solar- and wind-power projects as part of its plan to become completely reliant on “green energy” by 2020, according to the ministry. Companies including Qatar Electric and Fotowatio Renewable Ventures of Spain are helping develop those projects, it says.

“We are closer now than we’ve ever been,” he said. “Inshallah we will have geothermal power very soon.” – Bloomberg