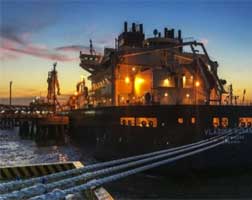 ● In the past year the amount of LNG terminal capacity under construction worldwide has more than doubled, with total capital expenditure rising from US$82.8 billion to US$196.1 billion.

● While touted as a “bridge fuel” by proponents, the footprint of a new gas-fired power plant in Europe or Asia burning U.S.-sourced LNG is approximately the same as that of a new coal-fired power plant in the same location due to leakage of methane throughout the gas supply system along with the energy penalty of long-distance shipping of LNG increase the footprint of gas. Expansion of LNG directly contradicts Paris climate goals, which require a 15% decline in gas use by 2030 and a 43% decline by 2040, relative to 2020.

● Due to falling costs of renewable alternatives, the expansion of LNG infrastructure faces questions of long-term financial viability and stranded asset risk.

“LNG was once considered a safe bet for investors,” said Greig Aitken, research analyst at Global Energy Monitor. “Not only was it considered a climate-friendly fuel, but there was substantial governmental support to make sure that these mega-projects—including some of the largest capital sector projects ever built—were shepherded to completion with all the billions they needed. Suddenly, the industry is beset with problems.”

“The smart money like Berkshire Hathaway is pulling back from LNG,” said Ted Nace, executive director of GEM. “LNG’s problems won’t magically disappear with the end of the pandemic. In the power sector, modeling shows that renewable packages are already outcompeting imported gas in South Korea. And every year that goes by, renewables get more competitive.”

GEM’s survey of LNG infrastructure is based on the Global Fossil Infrastructure Tracker (GFIT), a project-by-project census of oil and gas facilities developed by Global Energy Monitor. GFIT uses the same methodology as the Global Coal Plant Tracker (GCPT), a biannual census of coal-fired power plants that is used licensed by Bloomberg Terminals and UBS Research, and used by the IEA, the World Bank, the OECD, UN Development Programme, the Economist, and many others.