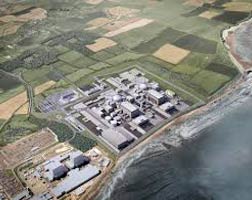 The £24.5bn nuclear power station Hinkley Point, situated in Sommerset, has come under fierce criticisms for the amount being spent for its construction.

This is despite the greenlight by the government for the nuclear plant to continue being built.

The plant, due to open in 2023, will cost as much as the combined bill for Crossrail, the London 2012 Olympics and the revamped Terminal 2 at Heathrow, calculated Peter Atherton, energy analyst at investment bank Jefferies. He said that, for the same price as Hinkley Point C, which will provide 3,200MW of capacity, almost 50,000MW of gas-fired power capacity could be built.

Deal to build UK nuclear plant should be finalised within weeks

“This level of new gas build would effectively replace the entire thermal generation fleet in the UK – much of which is old and inefficient – with brand new, highly efficient, low carbon, gas generation,” said Atherton.

Doubts about Hinkley Point have deepened after a detailed report by HSBC’s energy analysts described eight key challenges to the project, which will be built by the state-backed French firm EDF and be part-financed by investment from China.

These challenges include: declining demand for power in the UK, currently falling at 1% a year as energy-saving measures take effect; a three-fold jump in the UK’s interconnection capacity with continental Europe by 2022, massively increasing the country’s ability to import cheaper supplies; and “a litany of setbacks” in Finland, France and China for EdF’s European Pressurised Reactor (EPR) model, the same type as planned for Hinkley Point.

HSBC’s analysts described the EPR model as too big, too costly and still unproven, saying its future was bleak. They also pointed out that wholesale power prices have fallen by 16% since November 2011 when the government agreed a “strike price” for Hinkley Point’s output – effectively a guaranteed price of £92.50 per megawatt hour, inflation-linked for 35 years and funded through household bills.

“With the problems encountered by France’s EPR model and a strike price likely to be double the UK wholesale price at the scheduled 2023 time of opening of the proposed Hinkley C EPR, we see ample reason for the UK government to delay or cancel the project,” they said.

Paul Massara, chief executive of RWE NPower, one of the UK’s big power generators, used the study to step up his criticisms of Hinkley Point’s economics. “We will look back and think that nuclear was a expensive mistake,” he told the Sunday Times. “It’s one of those deal where my children, and my children’s children, are going to be thinking ‘was that a good deal?’ These big central planning bets are likely to be the wrong answer.”

There is no sign of the government wavering in its commitment to Hinkley Point. David Cameron is expected to sign a final deal in October during Chinese president Xi Jinping’s visit to the UK. The Department for Energy and Climate Change said: “The UK government and EDF are continuing to work together to finalise the project. The deal must represent value for money and is subject to approval by ministers.”

Despite the City’s scepticism, the department has argued that new nuclear energy will be competitive with future gas prices and the building programme will save UK households £74 a year in today’s prices by 2026-30.

EDF gave a staunch defence of the project, emphasising nuclear’s role in supplying secure baseload supplies at a time when wind and solar capacity have increased.

“Suggesting we should rely on importing more energy doesn’t solve our need for energy security,” said the company.

“Nuclear power is still the choice that gives reliable baseload power at the same time as helping Britain meet its carbon emissions targets. When the cost of extra back-up needed for intermittent renewables is included, the cost of nuclear remains competitive with any other technology.

“This is before we count the enormous benefit of a multibillion-pound investment in Britain, with the impact on jobs, skills and our global industrial competitiveness. Hinkley Point C will provide 25,000 job opportunities during construction and supply 7% of the UK’s electricity demand.”