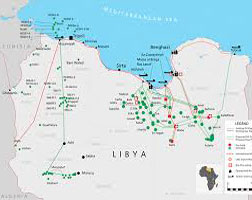 Islamist militants are reported to have seized two oil fields in central Libya, as rival groups fight for control of the country.

Forces guarding the Bahi and Mabruk sites retreated after running out of ammunition.

It is not clear which group seized the oil fields.

Libya has been without an effective government since Muammar Gaddafi was ousted in 2011.

It had been closed for some weeks because of violence and a slow-down of exports.