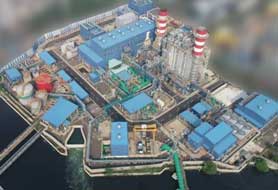 This new facility was built on the northwestern coast of Java by Indonesia’s state-owned electricity provider PT. PLN (Persero). The installation of the GTCC system, which is the most efficient in Indonesia, is also part of the government’s project to boost power supply capability to 35 gigawatts (GW). Mitsubishi Power is also supporting maintenance and management of the GTCC system via remote monitoring and stationing of a full-time engineer at the site, following the startup of operations.

The Muara Karang Power Plant is located approximately 10 km northwest of the capital city of Jakarta. It will play a key role in supporting urban development by meeting the rising demand for electricity across the West Java region, centered on Jakarta, and facilitating infrastructure development for urban transport systems such as the Mass Rapid Transit (MRT) and Light Rail Transit (LRT), which will contribute to sustainable economic development in Indonesia. The GTCC system was completed at an existing facility adjacent to the new plant. Despite constraints due to COVID-19, Mitsubishi Power was able to deliver the equipment and complete the contract a month ahead of schedule.

Mrs. Ratna, General Manager of Western Jawa Power Plant Development Unit, PLN welcomed this achievement: “This power plant is an important plant that supplies electricity to important facilities in the metropolitan area. We, PLN, genuinely appreciate the good performance of Mitsubishi Power and its contribution to starting commercial operation one month earlier than originally scheduled despite various obstacles such as COVID-19.”

Commenting on the start of the power plant’s operations, Kazuki Ishikura, President of PT. Mitsubishi Power Indonesia said: “In Indonesia, it is important to prioritize solutions for environmental issues alongside infrastructure and economic development. This has resulted in a growing need for stable and environmentally friendly power generation. Mitsubishi Power is committed to supporting this growing need in Indonesia with our gas turbine technology that can significantly reduce CO2 emissions when compared with conventional coal-fired power plants, while ensuring stable and sustainable power generation.”

Mitsubishi Power has forged close ties with Indonesia for half a century since shipping its first steam turbine to the country in 1971. To date, the company has delivered generating equipment with a cumulative output capacity of 12 GW. The first two M701F gas turbines were supplied to the Cilegon GTCC Power Plant in 2006, followed by two units each for the Muara Karang Power Plant in 2011, the Tanjung Priok Power Plant in 2012, and the Jawa-2 Project in 2018. Work on equipment for the Muara Karang project began in 2019.