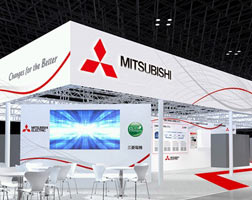 TOKYO – Japan’s Mitsubishi Corp and Tokyo Electric Power Co (Tepco) said on Monday they had won a contract to build a 300 billion yen (US$2.5 billion) gas-fired power plant in Qatar, as Japan steps up investment in infrastructure in Asia.

The 2.4 gigawatt plant is the type of investment envisaged in a scheme announced on Saturday by Japan’s industry ministry to coordinate bids for building power plants across Asia, as Tokyo seeks to counter China’s influence in infrastructure investment.

Japan unveiled a plan on Thursday to provide US$110 billion in aid for Asian infrastructure projects and wants to boost orders for energy plants and equipment to 9 trillion yen by 2020, more than double the 3.8 trillion yen in 2010.

The Ministry of Economy, Trade and Industry announced on Saturday it would coordinate bids with about 30 domestic companies, probably including Mitsubishi and Tepco.

Mitsubishi and Tepco will invest 30 % in a company in charge of building and operating the gas-fired station along with a water desalination plant, 20 km (13 miles) south of Doha in Qatar, for 25 years. Operations are set to start in 2017, the Japanese companies said.

Qatar Electricity & Water Co will also invest 60 % in the special purpose company, while Qatar Petroleum and Qatar Foundation will have 5 % each, the Japanese companies said.

Tepco, which is struggling financially as it tries to recover from the Fukushima nuclear disaster, will hold only a 1.5 % stake in the venture but may raise that to up to 33.3 % by the end of September, Mitsubishi and Tepco said. (US$1 = 121.6400 yen)