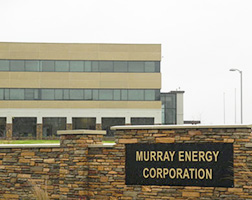 The largest privately held coal producer in the country has announced it will lay off as many as 1,418 workers across five of its coal mines in West Virginia — about 48 % of its workforce at those mines.

Murray also announced layoffs of 249 workers in Ohio and 162 people in Illinois, bringing the total to as many as 1,829 workers.

Ohio-based Murray Energy Corp. made the announcement one day after its president and CEO, Robert Murray, told a gathering at the North American Coalbed Methane Forum in Cecil that a massive workforce reduction could be coming.

In a statement, the company acknowledged both market conditions and policies from state and federal governments had led to the cuts.

“We regret that, due to the vastly increased use of natural gas in the Ohio Valley area to generate electricity, the ongoing destruction of the United State coal industry by President Barack Obama, and the excessive coal severance tax in the State of West Virginia, workforce reductions and operational changes have been forced upon the company,” the statement read.

The five mines affected were bought from Cecil-based Consol Energy at the end of 2013 for US$3.5 billion. They span Marshall, Marion, Ohio, Harrison and Monongalia counties. – Power Source