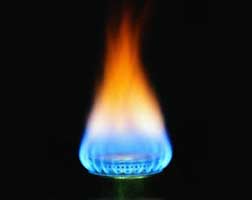 U.S. natural gas prices inched higher on Tuesday, as market players continued to monitor extended weather forecasts to gauge the strength of demand for the fuel before the end of the winter heating season.

On the New York Mercantile Exchange, natural gas for delivery in May tacked on 1.9 cents, or 0.74%, to trade at US$2.670 per million British thermal units during U.S. morning hours.

A day earlier, natural gas prices lost 6.3 cents, or 2.32%, to settle at US$2.650 amid speculation the end of the winter heating season will bring warmer temperatures throughout the U.S. and cut into demand for the fuel.

Updated weather forecasting models for the lower 48 U.S. states showed that temperatures will remain near-normal over the next two weeks.

Market experts warned that futures are likely to remain vulnerable in the near-term as the coldest part of the winter has effectively passed and below-normal temperatures in April mean less than they do in January and February.

Spring usually sees the weakest demand for natural gas in the U.S, as the absence of extreme temperatures curbs demand for heating and air conditioning.

Indications that supplies are more than ample to meet demand also weighed.

Total U.S. natural gas storage stood at 1.461 trillion cubic feet as of last week, 75.4% above year-ago levels and 11.5% below the five-year average for this time of year.

Last spring, supplies were 55% below the five-year average, indicating producers have made up for most of last winter’s unusually strong demand.

The Energy Information Administration’s next storage report slated for release on April 9 is expected to show a build of approximately 5 billion cubic feet for the week ending April 3.