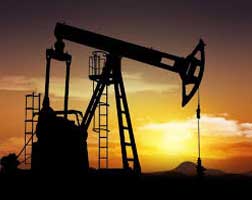 Oil prices rose more than a % on Thursday, clawing back part of the 6 % slump in the previous session that was triggered by a shock jump in U.S. crude inventories and record Saudi output, although analysts said sentiment remained bearish.

A 10.95 million-barrel surge in U.S. crude stockpiles to 482.4 million last week, the biggest gain in 14 years, and Saudi oil production of 10.3 million barrels a day in March had battered crude futures on Wednesday.

Cushing, the delivery point for West Texas Intermediate contracts, is now filled to 85 % of its total working capacity of 70.1 million barrels, the bank said.

Oil prices recovered slightly on Thursday in an extension of the recent high market volatility that has seen frequent price reversals as speculators bet on when ballooning supply in the U.S. will start to ease.

Close-to-close price volatility for Brent prices is at levels last seen during the height of the global financial crisis of 2008/2009, Reuters data shows.

Overall sentiment remains bearish due to persistent high production and modest demand that has knocked oil prices down around 50 % since June last year.

“We are seeing little sign of economic acceleration … and anticipate a meaningful decline in oil production is still a couple of months away,” U.S. Bank Wealth Management said in a research note.

The lifting of the U.S. export ban and a potential rise in Iran’s supply would pressure oil prices in the second half of this year, Nomura’s senior political analyst Alastair Newton said in a note.

Iran and western powers may finalize a nuclear deal by end June which could lift sanctions on Iranian oil exports.

A stronger greenback also contributed to oil’s losses on Wednesday as the dollar-denominated commodity became more expensive to holders of other currencies.

The dollar was buoyed after two influential officials with the Federal Reserve said the central bank could still hike interest rates in June despite weak recent U.S. data and investor scepticism, putting the spotlight squarely on the economy’s performance in the next two months. – Reuters