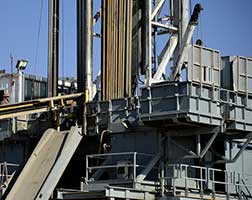 SAN FRANCISCO – Crude-oil futures on Friday suffered from their first weekly loss in a month as US supplies continue to mount, but natural-gas prices rallied as much of the US experienced below-normal temperatures.

Oil for March delivery   gave up 82 cents, or 1.6%, to settle at US$50.34 barrel on the New York Mercantile Exchange. That was the lowest settlement price since Feb. 11.

“Below-normal conditions seep across pretty much all of the U.S. like an ink blotch on the latest outlooks, set to stoke ongoing heating demand,” said Matt Smith, commodity analyst at Schneider Electric, in a note.

But while natural gas is again seeing buying interest, it has still been unable to reach “3 dollar-dom,” he said. On Friday, futures prices tapped a high of US$2.984.

According to the Energy Information Administration, working natural gas in storage as of Feb. 13 surpassed five-year storage levels for the first time in a year.

One of the key reasons for the sharp oil slide in the last six months of 2014 was a supply glut that collided with weaker-than-expected demand. Crude is still down more than 50% from its recent peak of US$107 in June.

Baker Hughes BHI, -1.21%  on Friday reported that the number of U.S. rigs actively drilling for oil and natural gas as of Feb. 20 fell 48 rigs to 1,310. The number has seen significant declines in recent weeks, but that hasn’t been enough to put a dent in the nation’s supply glut.