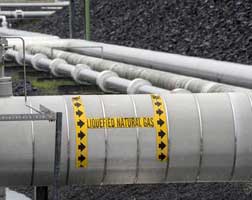 The Obama administration is warming up increasingly to U.S. exports of natural gas after years of blocking greater access by domestic producers to the international market.

Tucked inside the White House’s latest economic report to Congress is a section on energy production, with President Obama’s top economic advisers embracing the concept of boosting natural gas exports as a driver of job growth, even as it would likely drive up prices paid by U.S. consumers and businesses.

“An increase in U.S. exports of natural gas, and the resulting price changes, would have a number of mostly beneficial effects on natural gas producers, employment, U.S. geopolitical security, and the environment,” the report said.

As of Dec. 31 the Energy Department had given final approval to five liquefied natural gas export proposals. It has given conditional approval to four others — including the proposed Dominion Cove facility in Lusby, Maryland — pending environmental studies and other federal reviews.

But nearly 30 other applications remain outstanding. In making each decision, the department weighs whether the projects are in the national interest of the U.S. Factors considered include “the economic, energy security and environmental impacts” the project would have on the U.S., the Energy Department said.

Meanwhile, the Republican-controlled House has moved legislation to speed up the process.

Last month the House approved a bill that would require the Department of Energy to make a decision on natural gas export projects within 30 days of the completion of federal environmental reviews.

Fourty-one Democrats voted in favor of the measure.

“We’re now the world’s largest producer of natural gas, and because we have become so efficient at producing this resource, we have an excess supply we can sell to our allies across the globe,” Rep. Bill Johnson, Ohio Republican and sponsor of the bill, said last month.

A spokesman for energy producers said the change in attitude would be welcome if the administration backs up its words with positive action.

“Every major study, including those from the Energy Department, has shown that U.S. natural gas exports will create more jobs, strengthen our security and grow the economy,” said Zachary Cikanek of the American Petroleum Institute. “The concern is with the administration’s inaction — not its words. There is no reason to delay any permit, but dozens still await action while our competitors overseas push ahead. This is an incredibly important opportunity for the U.S. economy, and we’re hopeful that [Energy] Secretary [Ernest] Moniz and leaders in Congress can work together to accelerate the process.”

Current law requires the expedited approval of natural gas exports to any country with which the U.S. has a free trade agreement. But exports to non-free-trade countries require lengthy reviews by the Department of Energy and other federal agencies.