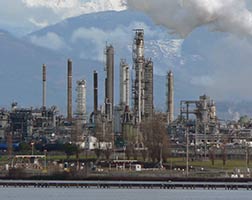 The CDGPDS is a compact, lightweight, low-cost energy efficient device that eradicates all exhaust fumes produced by internal combustion engines before they leave the tailpipe.

“The CO2 device can be retrofitted to every internal combustion engine on the planet. The device can also be adapted for use in gas vents used in refineries, exhaust stacks for incinerators, and more than 100 other common uses.” Yurth said.

CDGPDS incorporates proprietary plasma generating devices with high speed switching circuits to create what is known as a fracturing field inside a pulsating plasma chamber located within the exhaust system. The fracturing field breaks down or “dissociates” carbon dioxide and other pollutants within the device itself, thus eliminating the problem before it manifests.

“The challenge with dissociating carbon dioxide is that unlike most other three-atom gas molecules, CO2 is a very stable gas,” says Yurth. “We have succeeded in demonstrating virtually 100% efficiency in the dissociation process because we have been able to propagate what is known as non-linear dissonance in the plasma chamber.”

States Dr. Michael Kralik, Senior Physicist and Chief Science Officer for Nova: “Carbon dioxide molecules behave according to a well-known set of harmonic resonances which generate the fields that attract and bind the oxygen atoms to the central carbon atom. By subjecting the gas to intensely dissonant field effects, we are able to disrupt the spin polarity and oscillation frequencies that bind the atoms together.”

According to Yurth and Kralik, the search for a solution to the production and release of carbon dioxide and other potent greenhouse gases has been the target of intensive research for more than 40 years.

The CO2 device is the result of Nova’ s joint technology development arrangement with Collier Group, LLC and SaviCorp, a publicly traded supplier of the DynoValve family of automotive products since 2004.