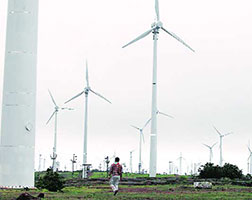 Lack of clarity on part of the government has put a spanner in the expansion of wind power generation in the state. While 280 MW projects have already been commissioned, the failure of the state government to sign power purchase agreements (PPAs) has put developers in a quandary about the future of their projects.

After construction of the turbines, commissioning of the projects is done by the Maharashtra State Electricity Distribution Company Limited (MSEDCL). This is supposed to be followed by the execution of a PPA between the energy body and the agency generating wind power. As a result of the revised policy of last year, MEDA’s nod is no longer necessary for commissioning of wind power projects.

Though on paper the state has managed to pave the way for generation of wind power, companies associated with the sector talk otherwise. The major issue plaguing the industry is the failure of the energy company to sign the PPA. Industry sources point out that not a single PPA has been signed in the last year or so. This has practically left investments worth Rs 2,100 crore stuck with no revenue being generated.

“In some cases power is being evacuated from the site and sent to the grid also but is not billed,” said an industry insider.

“The wind power is sold to the energy corporation with a constant tariff for the next 13 years. This had translated into hedging of the cost of energy for the next 13 years, yet PPA has not followed,” said another promoter. Majority of the projects had attracted private equity firms and reputable developers like Morgan Stanley, Goldman Sachs and Green Infra .

Chandrashekar Bawankule, Minister for Energy and New & Renewable Energy, said the bottleneck was due to the lack of a policy on renewable energy in the state. “As the state did not have a renewable energy policy, the developers were asked to sign an affidavit stating that they would agree to the terms and condition of the new policy. We will come out with the new energy policy within a week and then all pending projects would be regularised,” he said.

Bawankule said the cost of per unit renewable energy in the state was proving to be a major issue. “The per unit cost of energy is Rs 5.70 and when taxes and surcharges are added it comes to around Rs 8 per unit. If industries can purchase energy at the rate of Rs 3 per unit in the open market, why would they buy energy from the grid? We need to economise the cost of energy also,” he said. – Indian Express