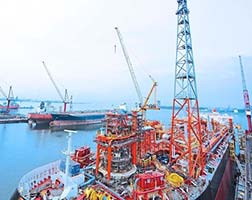 Oil and gas companies have been hard hit by the fall in the equities market and the ringgit, forcing some to scale back its operations.

Petronas president and group CEO Datuk Wan Zulkiflee Wan Ariffin saying last Friday that only 14 of Petronas’ oil rigs will be in operation by the end of this year, compared with 39 as at the end of last year.

The idling of over half of its oil rigs within a year is a clear indication of the challenges facing the industry which has had to endure collapsed crude oil prices for more than a year. Globally, the rig count, considered a proxy for industry activity, has fallen sharply since last June.

Bumi Armada fell to a fresh low of 89 sen since its listing. It was trading at 90 sen, down five sen.

The KLCI was also dragged down by losses in Genting, Telekom Malaysia and Tenaga.