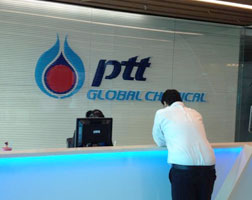 The decline in global crude oil prices is making Thailand’s PTT Global Chemical PCL reduce its export of naphtha and using it as a feedstock for its own olefin crackers instead.

By doing this, the company hopes to raise its annual olefins capacity by 600,000 tonnes to 3.5 million tonnes, Chief Executive SupattanapongPunmeechaow told reporters.

“Global oil prices are likely to stay at low levels over the next five years and we have to prepare for that,” he said.

The company will examine more details about investment and focus on high value-added petrochemical products to boost margins, he said, adding the project is part of preparations for a potential decline in domestic gas supplies.

PTTGC normally exports 1.32 million tonnes a year of naphtha. It produces petrochemicals primarily from natural gas, and in the past it enjoyed good margins by using domestic gas supplied by its parent PTT from the Gulf of Thailand.

One of the world’s top 10 ethylene makers, PTTGC has a petrochemicals production capacity of 8.75 million tonnes a year and runs a refinery with a crude and condensate refining throughput capacity of 280,000 barrels per day. (Reporting by KhettiyaJittapong and ManunphattrDhanananphorn; Editing by Greg Mahlich)