Oil is changing. Conventional oil resources are dwindling as tight oil, oil sands, heavy oils, and others emerge. Technological advances mean that these unconventional hydrocarbon deposits in once-unreachable areas are now viable resources. Meanwhile, scientific evidence is mounting that climate change is occurring, but the climate impacts of these new oils are not well understood. The Carnegie Endowment’s Energy and Climate Program, Stanford University, and the University of Calgary have developed a first-of-its-kind Oil-Climate Index (OCI) to compare these resources.

All Oils Are Not Created Equal

Next Steps for the OCI

The character of oil is changing. Consumers may not notice the transformation—prices have fluctuated, but little else appears to have changed at the gas pump. Behind the scenes, though, the definition of oil is shifting in substantial ways. There is oil trapped tightly in shale rock, and oil pooled many miles below the oceans. Oil can be found in boreal forests, Arctic permafrost, and isolated geologic formations. Some oils are as thick as molasses or as gummy as tar, while others are solid or contain vastly more water or gas than normal.

Oil resources were once fairly homogeneous, produced using conventional means and refined into a limited number of end products by relatively simple methods. This is no longer the case. Advancements in technology mean that a wider array of hydrocarbon deposits in once-unreachable areas are now viable, extractable resources. And the techniques to turn these unconventional oils into petroleum products are becoming increasingly complex.

As oil is changing, so, too, is the global climate. The year 2014 ranked as the earth’s warmest since 1880. Fossil fuels—oil along with coal and methane gas—are the major culprits.

The only way to determine the climate impacts of these previously untapped resources—and to compare how they stack up against one another—is to assess their greenhouse gas (GHG) emissions at each stage in the oil supply chain: exploration, extraction, processing, refining, transport, and end use. The more energy it takes to carry out these processes, the greater the impact on the climate. And in the extreme case of some of these oils, it may take nearly as much energy to produce, refine, and transport them as they provide to consumers. Moreover, each oil yields a different slate of petroleum products with different combustion characteristics and climate footprints.

The Oil-Climate Index (OCI) is a metric that takes into account the total life-cycle GHG emissions of individual oils—from upstream extraction to midstream refining to downstream end use. It offers a powerful, yet user-friendly, tool that allows investors, policymakers, industry, the public, and other stakeholders to compare crudes and assess their climate consequences both before development decisions are made as well as once operations are in progress. The Oil-Climate Index will also inform oil and climate policy making.

The index highlights two central facts: The fate of the entire oil barrel is critical to understanding and designing policies that reduce a crude oil’s climate impacts. And oils’ different climate impacts are not currently identified or priced into the market value of competing crudes or their petroleum products. As such, different oils may in fact entail very different carbon risks for resource owners or developers.

. Analysis of the first 30 test oils to be modeled with the index reveals that emission differences between oils are far greater than currently acknowledged. Wide emission ranges exist whether values are calculated per barrel of crude, per megajoule of products, or per dollar value of products, and it is expected that these emission ranges could grow as new, unconventional oils are identified.

There are several critical variables that lead to these variations in oils’ life-cycle climate emissions. They include how gas trapped with the oil is handled by producers, whether significant steam is required for oil production, if a lot of water is present as the oil reservoir depletes, how heavy (viscous) or deep the oil is, what type of refinery is used, and whether bottom-of-the-barrel products like petroleum coke (known as petcoke) are combusted. Given these factors, the most climate-intensive oils currently identified—gassy oils, heavy oils, watery and depleted oils, and extreme oils—require special attention from investors, operators, and policymakers.

Concerns about oil scarcity beset the world for nearly half a century, but that may no longer be the overriding worry. Larger questions loom about the changing nature of oil resources, their unknown characteristics, their climate and other environmental impacts, and policies to safely guide their development and use.

Indeed, there are thousands of oils available globally for production and use. The earth is stocked with a surfeit of hydrocarbons. As of 2013, there are an estimated 24 trillion barrels of oil in place, of which 6 trillion barrels are deemed technologically recoverable.

These resources take different forms—from rocky kerogen to sludgy tar to volatile gassy liquids. They exist under vastly different conditions: deep and shallow; onshore and offshore; pooled and dispersed; and in deserts, permafrost, rainforests, and grasslands. An evolving array of techniques must be employed to transform them into a myriad of petroleum products, some more valuable than others, which flow in all directions to every economic sector and most household products.

Advancements in technology that have unlocked unconventional hydrocarbon deposits in once-unreachable areas are costly and risky in both private and social terms. Many of these advancements result in larger GHG emissions than traditional extraction methods, and some oils have more than 80 % higher emissions per barrel than others (see figure 1). 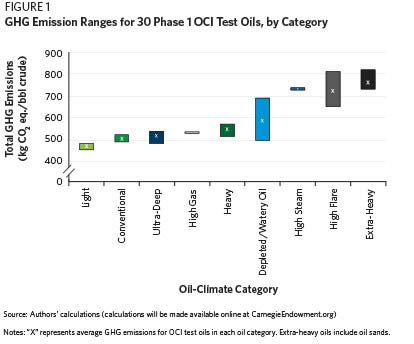 Consider a few examples. For California’s Midway Sunset oil field, a sizable portion of the oil’s own energy content is used before any of the petroleum products the field ultimately provides reach consumers. This century-old oil field requires large volumes of steam to be injected into the reservoir to loosen the oil and allow it to flow. Generating this steam requires up to one-third of the energy content of the oil itself, in the form of natural gas. The water content of this oil is high and therefore takes extra energy to lift. Much of its oil is very heavy and requires energy-intensive, complex refining techniques. The combination of energy used in extraction and refining means almost half of Midway Sunset’s total greenhouse gas emissions are released before the resource even gets to market.

Other oils, such as Norway Ekofisk, fare much better in these regards. This light oil is more easily produced. Extraction operations are tightly regulated by the Norwegian government; as such, the gas produced with the oil is gathered and sold instead of burned (or flared) on-site and wasted. Ekofisk oil is processed by the simplest hydroskimming refinery, and less than 10 % of its greenhouse gases are emitted before it gets to market.

Oil markets, meanwhile, are durable given the lack of ready substitutes. Oil consumption has marched steadily upward, from 77 million barrels per day (mbd) in 2000 to 92 mbd in 2014, despite a major global economic downturn. Oil dominates the transportation sector, providing 93 % of motorized transportation energy. Overall, the oil sector is responsible for a reported 35 % of global GHG emissions.

Parsing oils by their climate impacts allows multiple stakeholders, each with their own objectives, to consider climate risks in prioritizing the development of future oils and the adoption of greater policy oversight of today’s oils. While objectives of stakeholders may vary (for example, environmental nongovernmental organizations may have different perspectives than investors), all actors would be better served by accurate, transparent measures of climate risk associated with different oils.

The Most Challenging Oils

Even with the decline in oil prices that began in August 2014, there remains fierce competition between diverse global oils. A few of them are more challenging in terms of climate change than others.

As the changing climate results in higher social costs, the environmental limitations on oil production and consumption will have more significant effects than the industry has heretofore acknowledged.1 Recent research has shown that to keep the earth from warming more than 2 degrees Celsius from preindustrial times—the limit set in the 2009 Copenhagen Accord as the threshold for “dangerous” human interference in the climate system—at least one-third of the world’s oil reserves should not be burned or the carbon from refined oil products’ combustion should be safely stored.2Investors and companies facing such constraints will need data on the total life-cycle emissions from the exploration, extraction, transportation, refining, and combustion of oil resources, data that do not now exist, at least not in a consistent, transparent, and peer-reviewed way.

While oil type, production specifications, and geography were initial factors in selecting oils to model in Phase 1 of the Oil-Climate Index, data availability turned out to be the overriding factor. The oils modeled in the first phase are found around the world (see table 1). Oils were analyzed across the entire value chain—the series of transformations and movements from an oil’s origin to the consumption of the slate of petroleum products it yields.

Unearthing oil and preparing it for transport to a refinery is the first step in the value chain. The processes involved differ from oil to oil. Together, exploration, production, surface processing, and transport of crude oil to the refinery inlet comprise upstream operations, and the resulting GHG emissions are modeled in OPGEE.

Crudes vary significantly in their upstream GHG impacts. To date, OPGEE has been run on approximately 300 global crudes, many of which are in California and Canada. This represents more upstream crude runs than any other modeling effort, including the National Energy Technology Laboratory’s Development of Baseline Data and Analysis of Life Cycle Greenhouse Gas Emissions of Petroleum-Based Fuels (twelve crudes in November 2008); the Jacobs Consultancy’s Life Cycle Assessment Comparison of North American and Imported Crudes (thirteen crudes in 2009); TIAX Consulting’s Comparison of North American and Imported Crude Oil Lifecycle GHG Emissions (nine crudes in 2009); and IHS Consulting’s Comparing GHG Intensity of the Oil Sands and the Average U.S. Crude Oil (28 crudes in 2014).

For the purposes of the Oil-Climate Index, it was critical that data were available to simultaneously model both upstream and midstream emissions. This narrowed the field down to 30 OCI test oils for the first phase.

There is large variation in upstream emissions across the 30 test oils. The oil with the highest emissions intensity has approximately twelve times the emissions of the lowest-intensity oil.