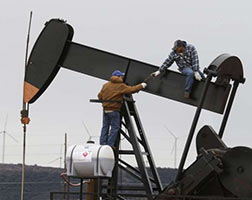 Crude oil supplies are on pace to reach their longest surplus since 1985 and are just one quarter away from meeting the previous six-quarter record set in 1997 and 1998.Unless something significant happens in the coming months, the world is poised to experience the longest period of oil surplus since 1985. According to data from the International Energy Agency compiled by Bloomberg, the crude supply has exceeded demand globally for the last five quarters, nearly surpassing the previous recent record of six consecutive quarters in 1997-1998.

It would take eight quarters of global surplus to smash through all the records back to the ’80s, but oil industry analysts think that’s possible. There’s little evidence of OPEC cutting back production in the near future, according to Bloomberg. Saudi Arabia, the group’s largest member, might actually pump additional crude to increase the pressure on the shale fields in North America. Also, if Iran is able to strike a deal to end sanctions, then worldwide supply could increase even more.

According to Bloomberg, OPEC pumped 31.3 million barrels a day in May. If that rate continues, it could allow for a million-barrel daily surplus in the third quarter of 2015 and a 600,000-barrel-a-day excess in the fourth quarter. The strong numbers are expected to last at least through 2016.

This trend towards high production from OPEC, particularly from Saudi Arabia, has been developing since last year. It was thought that the move was meant to deter the more expensive shale oil and deep-water wells in the US. More recent reports suggested that crude oil might not break US$100 a barrel again for another decade and could dip as low as US$40 at times.