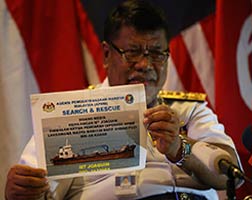 KUALA LUMPUR: MT Joaquim, a tanker containing 3, 500 metric tonnes of oil which was feared to have been lost, has been found in Indonesian waters.

The Singapore-registered tanker which disappeared in the Malacca Strait of Malaysia was found without its cargo, according to Malaysian Maritime Enforcement Agency.

The 10 crew member-tanker had been on its way to Langkawi, Malaysia, from Tanjung Pinang, Indonesia, were released by a group of hijackers at 0055 GMT on Sunday, the Malaysian Maritime Enforcement Agency said in a statement on Sunday.