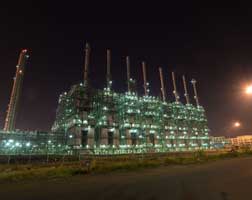 India’s ONGC Petro additions Limited (OPaL), a joint venture company incorporated in 2006 between Oil and Natural Gas Corporation (ONGC), GAIL and GSPC, recently opened the country’s largest petrochemical plant in Dahej SEZ, Gujarat, that has an investment of US$4 billion.

The opening was officiated by India’s Prime Minister Narendra Modi who said that the country’s average per capita consumption of polymers in India is 10 kg, compared to the global average of 32 kg, thereby pointing out the potential for growth in the wake of higher disposable incomes of the middle classes and urbanisation.

The 1,100 kilo tonnes/year capacity dual feed cracker unit has already been commissioned and delivered its first consignment of about 400 tonnes of polymer to an Ahmedabad-based company recently. The company’s polypropylene and polyethylene plant are expected to operate at 100% capacity in a few months.

The company says demand for polymers in India is huge and is expected to further rise with the growth in GDP. It also points out that India will continue to be in deficit of PE in the foreseeable future; downstream integration will be by ONGC who will be supplying the feedstock required for this project from its Hazira, Uran and Dahej facilities.

Apart from the home turf, OPaL says it will also be marketing a substantial part of its produce in the international market.