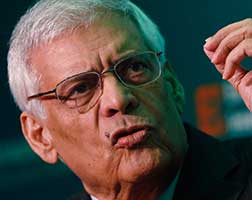 The increasing demand of oil price and decreasing production mean that oil prices will not get lower, OPEC Secretary General Abdalla Salem El-Badri said, but assures that the cartel will not reduce crude output.

The Russian Energy Minister said that the situation in the crude market will improve in 2016, as Russia and OPEC share the same views on many questions.

“Despite continuing uncertainties, there are possible signs of achieving a more balanced situation in the oil market and to stabilize it by 2016, which is a mandatory requirement for the continuity of timely and sufficient investments,” said a joint statement released after the meeting.

The pricing policy of Russia and the OPEC oil production cuts were not discussed at the meeting with El-Badri, said Novak.

“A number of countries do not want to do this, so OPEC decided to maintain the production volume. The balance of supply and demand must be brought into line by the market,” he added.

“China has a problem with oil reserves, there is some speculation there. But their economy is growing,” said the OPEC head.

The next meeting between Russia and OPEC could take place in Vienna in the second half of 2016.