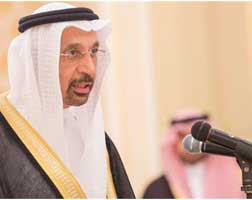 Members of the Organization of the Petroleum Exporting Countries (OPEC) will significantly reduce oil production over the next five years, according to Saudi Arabian Energy Minister Khalid al-Falih.

“The US is the largest oil market, and Saudi Arabia is the largest exporter and one of the world’s top three oil producers. The US market will always be a key market for the kingdom, and we recently announced the full acquisition of an oil refinery with a capacity of 600,000 barrels, and we intend to use it as a platform for our future growth,” Falih said, during a press conference at the 8th International Forum on Energy for Sustainable Development in Kazakhstan’s capital Astana.

Falih also said that the US had “excellent” supply possibilities for domestic production in the Gulf of Mexico, and that the oil obtained there is believed to be sent elsewhere, which was the reason the OPEC countries agreed to lower their production and supply levels, according to a report.

“[Output cuts] will not impact our obligations, and our aim to increase Saudi Arabia’s share in the US market. We are supporting this with US$15-18 billion investments. But if not the US, we will export somewhere else,” Falih said.

On May 25, OPEC members and ten other oil-producing countries led by Russia agreed to extend their agreement to cut output for an additional nine months in a bid to maintain current oil prices at their level.