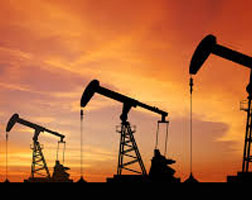 Oil traded at an almost two-month high in London amid speculation that a slowdown in US drilling may curb production.

Brent crude futures were little changed in London, paring an earlier increase of as much as 1.7 %. US drillers cut the number of rigs in service by 84 to 1,056, the lowest since August 2011, data from Baker Hughes Inc. show. Still, the decline isn’t steep enough to sufficiently curb production and address the current excess, according to Goldman Sachs Group Inc. Libya’s National Oil Corp. said it would stop pumping crude at all its fields if attacks continue.

The U.S. is pumping oil at the fastest pace in three decades as a combination of horizontal drilling and hydraulic fracturing unlocks supplies from shale formations including the Permian and Eagle Ford in Texas and the Bakken in North Dakota.

“The reduction in drilling rigs was relatively strong,” Olivier Jakob, managing director at Petromatrix GmbH, said by e-mail from Zug, Switzerland. “We know that the drop in production is going to come later this year.”

Brent for April settlement rose as much as US$1.05 to US$62.57 a barrel on the London-based ICE Futures Europe exchange, the highest since December 22, and traded for US$61.44 as of 12:53 p.m. New York time. It climbed 6.4 % last week. The European benchmark crude traded at a premium of as much as US$8.50 to WTI for the same month, the widest since August.

Meanwhile, West Texas Intermediate for March delivery rose as much as 91 cents, or 1.7 %, to $53.69 a barrel in electronic trading on the New York Mercantile Exchange. The contract increased US$1.57 to US$52.78 on Feb. 13. Floor trading on Monday will be suspended for a public holiday and transactions will be booked Tuesday for settlement purposes. The volume of all futures traded was 51 % below the 100-day average for the time of day.

A fire at a pipeline carrying crude to Libya’s eastern port of Hariga has been extinguished and National Oil plans to reopen it in a week, according to Mohamed Elharari, a spokesman for the state oil company in Tripoli. Production has been cut by 180,000 barrels a day after the bombing of a pipeline that carries crude to Hariga, he said earlier.

On a related news, as Egypt retaliates against Libya on the latter’s earlier execution of 21 Egyptian Christians, marking Egypt’s first open military action, where a security collapse and a power struggle between Islamists and the elected government have driven the nation to the brink of chaos.

Libya’s daily output, which averaged 1.6 million barrels before the 2011 rebellion that ended Muammar Qaddafi’s 42-year rule, was estimated at 300,000 barrels in January. Hedge funds and other money managers’ net wagers on rising Brent prices rose 13 % to 158,974 contracts in the week ended Feb. 10, the highest since the early days of last year’s oil slump on July 8, according to ICE data. The change was driven by a reduction in bearish positions, rather than fresh bullish bets, signalling traders remain cautious that the price recovery will endure, according to Saxo Bank A/S.

Drillers in the US, the world’s largest oil consumer, have idled 519 rigs in the past 10 weeks, a 33 % reduction, according to Baker Hughes, a Houston-based oil-field services company.

As for the rig count, Damien Courvalin, a New York-based analyst at Goldman Sachs, said in a report, “The rig count decline is still not sufficient, in our view, to achieve the slowdown in US production growth required to balance the oil market, thus oil must remain lower.” The nation pumped 9.23 million barrels a day through February 6, the fastest pace in weekly Energy Information Administration records dating back to January 1983.

Brent gained about 36% since January 13 when it fell to US$45.19 a barrel. Oil prices will continue to recover in the second half of this year and the global crude surplus is less than the 1.8 million barrels a day the country previously estimated, according to Kuwait Oil Minister Ali Al-Omair.

“We were expecting oil prices to recover in the second half, but they recovered faster than what we expected,” Al-Omair said at an industry conference in Kuwait City. “I expect oil prices to keep improving.”