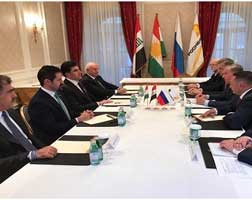 Russia’s Rosneft is in discussion with the Kurdistan Regional Government (KRG) to launch oil exploration and extraction in the disputed territories, including the oil-rich Kirkuk Province located in the southern Kurdistan Region.

The oil company is examining exploration in the fields near the city of Kirkuk, as well as in the areas located on the Syrian border, three persons aware of the talks said in an interview with a news agency.

At the beginning of June, the KRG and Rosneft signed an agreement where the Russian company would work on five sites that are under the control of the Kurdish government without revealing the name of the locations.

According to the talks, Rosneft aims to work in the super giant oil field of Bai Hassan located in Kirkuk which was the biggest in the world in 1920 when it was discovered.

The sources who were participating in the talks also mentioned that the Russian company discussed a block in the Kurdish Ezidi city of Sinjar, known as Shingal, which is located on the Syrian Kurdistan border, called Rojava. Ain Zalah is another oil field in the west of Mosul Dam which was previously operated by the federal government of Iraq before the emergence of the Islamic State (IS) in June 2014.

The term “Disputed territories” was rejected by the KRG officials, as they claimed the areas are part of the Kurdistan Region when they were liberated from the IS by Kurdish Peshmerga forces.

The disputed regions are set to be included in the planned independence referendum held on September 25, 2017.

“Rosneft will get access to the major regional transportation system with the throughput capacity of 700,000 barrels per day (bpd),” Rosneft stated earlier in June, stating the capacity “is planned to be expanded up to one million bpd by the end of 2017.”