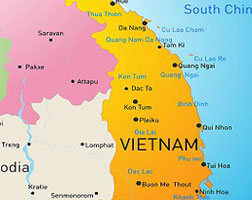 To reduce the country’s reliance on refined oil imports, Vietnam is set to start up its second oil refinery, located 260 km south of Hanoi, by early August this year, according to a Reuters report. The US$9 billion refinery will process mostly crude oil imported from Kuwait.

Owned by Nghi Son Refinery and Petrochemical, the 200,000-barrel-a-day (bpd) facility is already running at 55% capacity and is undergoing a long start-up process, said Reuters.

Vietnam has been struggling to maintain its crude oil and gas output due to declining production from key fields and ongoing pressure from China over disputed areas in the South China Sea.

The company also said it has no plans to use crude oil from other sources and will sell all of its gasoline, diesel products and liquefied petroleum gas in the local market, while other products, including petrochemicals, will be exported.

Vietnam’s first refinery, the 130,000-bpd Dung Quat plant, started up production in 2009. When fully operational, the Nghi Son plant will add to this output and help Vietnam meet 70% of its demand for fuel.

Vietnam imported 5.56 million tonnes of refined fuels in the first five months this year, up 11% from a year ago, according to the government’s General Statistics Office.