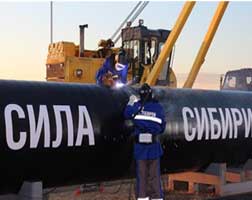 The deal is the latest sign that Russia is tightening its ties with China, a major gas buyer. It comes at a time of turmoil for rival major exporter Qatar amid a dispute with its Gulf neighbors who have imposed political and economic sanctions on Doha.

The new pipeline, dubbed the “Power of Siberia”, has a planned annual capacity of 38 billion cubic meters.

CNPC added that it agreed to speed up the construction of pipeline and market development, as well as natural gas processing plants and domestic underground gas storage facilities to make sure the project starts on time.