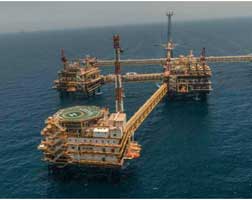 Despite the sanctions imposed on Qatar by its neighboring nations, the Gulf Arab state has announced plans to raise liquefied natural gas (LNG) production capacity through a new development project on its giant North Field, which it shares with Iran.

In April, Qatar lifted a self-imposed ban on development of the North Field, the world’s biggest natural gas field, and announced a new project to develop its southern section, increasing output in five to seven years.

“After further assessment, we have decided that the best way to develop this huge project is by dedicating it to the production and export of liquefied natural gas,”Kaabi said.

“We have decided that the best option would be to double the size of the project to 4 billion cubic feet of gas per day. This project will strengthen our position as the world´s largest LNG producer and exporter,” Kaabi said.

QP will need to build new LNG trains to meet the expansion in capacity, Kaabi said. “We will be looking for international partners to join us,” he said, declining to say when a tender would be issued.

The announcement comes a day after France’s Total signed an agreement with Iran to develop its part of the shared offshore gas field that Tehran calls South Pars. Iran, which suffers severe domestic gas shortages, has made a rapid rise in production from South Pars a top priority. The deal on Monday with Total is to develop its South Pars Phase 11 project, the first major Western energy investment in the country since the lifting of sanctions.

Kaabi said there is no cooperation with Iran on any project in the North Field, but the countries have a joint committee that meets every year to discuss development of the field. Both countries are aware of what the other is doing, he added.